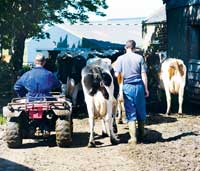 Farmers and herd managers are spending an increasing amount of time handling staff instead of cows and appropriate training can therefore be extremely beneficial, according to DairyCo extension officer Andrew Dodd.

“A lot of farmers have never really had to manage much labour before, but now face the challenge of getting them to run the farm the way they want. And when staff are happy and motivated you will get more from them and will keep them for longer.”

Mr Dodd recently set up a series of tailored staff management training days for Abbey Farmers – a co-operative group of 16 dedicated dairy producers near Tewkesbury. With the help of Cedar Associates’ Alistair Gibb – a former dairy manager – he arranged a staggered, three-day course to meet the producers’ needs.

The course covered leading and motivating staff; effective communication; and team building. “A lot of it is quite hands-on, and there is also the ability to learn from other farmers’ mistakes or successes, looking at how best to handle similar situations. It’s all about guiding people to find their own style of management within the boundaries of best practice,” says Mr Dodd.

Recently Rob Warren, who milks 410 cows at Oakey Farm, Moreton Valence, Gloucestershire, attended the second training day with his herd manager, Richard Lynham. “The business has faced some big challenges and changes over the past six months – both Richard and I had previously done some management training, but I thought it was time to have a bit of a refresher,” says Mr Warren.

“At Abbey Farmers we have been training ourselves and our staff for the past 25 years – we really value it. When people are not trained to do something, they haven’t got a hope. It also does you good to get off the farm and reflect on your own business and personality.”

In October, Mr Warren increased his full-time staff from four to five, with an extra five part-time workers hired to manage the move to milking three times a day. “I’ve also stepped back a bit, having been very involved on a day to day basis. Richard’s job has therefore changed a lot – he has less contact with the cows and now has to do a lot of people management.”

The event encouraged delegates to examine their own characters and management styles, be that aggressive, assertive, or submissive. “I know I can be aggressive at times – it does you good to be aware of your faults, and to try and modify your behaviour appropriately.”

It also looked at communication with and between staff – an important aspect to Mr Warren’s business. “We have one guy who doesn’t communicate back to us well, as well as two Polish workers – so we need to manage them differently.”

From a practical aspect, Mr Warren and Mr Lynham were struggling to integrate the new staff, and wanted to ensure the night milkers were following the correct milking procedures all the time. “We now have whiteboards everywhere, to remind them of the routines for teat dipping and so on.”

Mr Warren also wanted to ensure he was making best use of his team’s time and abilities. “Sometimes we haven’t had enough for the full time staff to do, and there’s nothing worse than having nothing to do. People want to feel needed and used – it’s important to keep challenging them so they don’t get bored.”

As part of the reorganisation he has therefore cut out three part-time subcontractors – Mr Lynham now does all the foot trimming and the Reproductive Management System, and one part-time relief milker has moved onto night milking.

“Within a few weeks the team should be fully used and everything should have slotted into place,” he says. “As an employer there is an obligation to make sure my staff are happy – when they are happy the chances are I will be, too.”