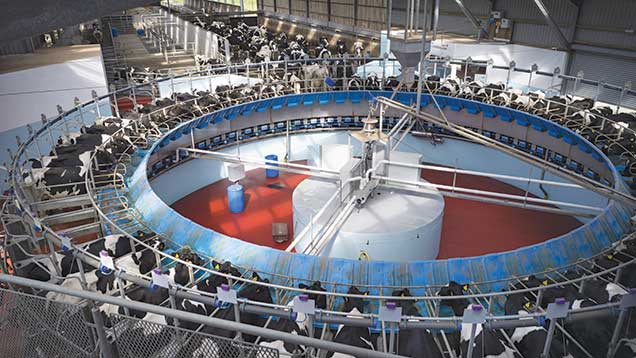 The UK dairy industry should be pushing for a milk futures market according to two US dairy experts.

In the US a milk futures market has existed since the late ’90s. Mr Lange said most progressive dairies would be hedging some of their milk.

Speaking at the Total Dairy Seminar in Gloucestershire last week, Mr Lange told delegates a futures market would be a win-win for processors and producers in the UK.

“It is a little bit of a trade-off. You could take a loss, but it gives you a strategy in terms of marketing and it gives you a floor and a ceiling for milk price.”

Mr Bethard said he hedged 80% of milk from Ponderosa and Dairy Dreams Dairy, which in total consists of 9,000 cows and produces 230m lbs (104,326,236kg) worth of milk annually, on the Chicago and Mercantile Exchange this year.

He said: “I hedge my milk not to make money, but to protect me from the losses and avoid the disasters. It’s the other 20% of milk I really can make the money from. You need to know your breakeven milk price if you are going to do it though.”

Here’s what some of the audience at the event and on Twitter thought about the possibility of a UK futures milk market.

“I would certainly look at it, but it would be down to an individual farm decision. It could help provide some security, but you would really have to keep your eye on it. I have bought some soya on the future market before.”

“I think it will happen, but I think it will be more at a dairy level rather than stock market level. So more farmers will fix in with the processor.”

If it’s another way to market milk and give a guaranteed price then I think it’s a good thing. It could help give some security to the industry

“A futures market would face massive viability, regulatory and access issues. It’s unlikely it will come and needs a more pragmatic solution.”

“Without a MMB the British milk industry and small scale dairy farmers are doomed.”