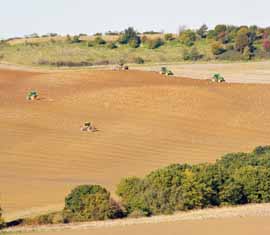 UK farming businesses borrowed almost £11.6bn at the end of last year, a rise of 3.7% on a year earlier. Bank of England figures to the end of January this year record a similar annual increase, taking total borrowing to £11.65bn.

The proportion of available credit being used was almost 80% in both 2009 and 2010, although the most recent months show a slight increase in that measure.

The increase in borrowing was in line with expectations, said HSBC’s head of agriculture, Allan Wilkinson. As well as having an increased requirement for working capital, arable businesses were investing in land and grain storage, he said.

“You need to make sure you see a margin between cost of production and forward prices. While output prices look good, wheat production costs could easily be £140/t.”

The wide range of production costs within sectors would make some question how they were running their enterprises. Beef and sheep producers needed to look carefully at marketing and at making use of schemes such as ELS and HLS.

The dairy sector was under particular pressure and some new requests for increased facilities were significantly above the average increase of 3.7%.

NFU economist James Edwards attributed this largely to earlier and larger arable crop income rather than payment of sfp, as payment progress at the end of January was behind that at the same date in 2010.

Part of the rise in deposits may also be attributable to an increase in the security required by banks, which is due to be discussed at the next routine meeting between the NFU and bankers.

While arable sector borrowing showed a relatively modest rise, the increase in livestock borrowing was more general, said Jimmy McLean, head of agriculture at Royal Bank of Scotland. Funds were needed for infrastructure improvements driven by legislation such as NVZs and enriched cages for poultry, as well as to cover increased working capital requirements, he said.

“Farmers, in common with many other smaller businesses, don’t do as much cash-flow planning as they should – they need to find time for that,” he said.

The confidence felt by many beef and sheep producers towards the end of 2010 had been knocked recently by higher costs, said Euryn Jones, Barclays’ national agricultural specialist.

“Volatility always makes budgeting challenging but that shouldn’t be used as a reason not to budget,” he said.

Although the cost of fixing had hardened recently, it was still possible to fix for 10 years for most Barclays farm borrowing for a total cost of well below 6%.

GET READY FOR BASE RATE INCREASES


Barclays expects the Bank of England’s Monetary Policy Committee to announce base rate increases of 0.25% in May, August and November, taking it from the current 0.5% to 1.25% by the end of the year.

Adverse movements (from a farmer’s perspective) of 5-6% in the euro-sterling exchange rate are also expected by Barclays in the run up to 30 September, when the Single Payment Scheme exchange rate is set.

Claimants can lock in to current exchange rates that are close to the highest rate at which the SFP has been paid under the current system.