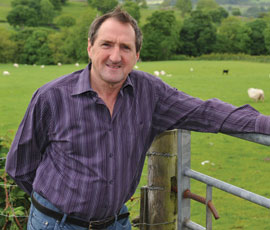 The survival of Wales’ farming industry would be threatened if the UK withdrew from the European Union, warns the president of the Farmers Union of Wales.

Emyr Jones insists EU membership is critical to the economic viability of Wales and says farmers should not be fooled into believing that opting out would mean less red tape. They would still have to comply with EU standards if they import into Europe, Mr Jones told the union’s annual general meeting at Aberystwyth yesterday (June 17th).

“Given that successive UK governments have made it clear they do not want to provide support for agriculture and are quite happy to liberalise food importation, it is difficult to imagine how we would survive outside the EU,” he said.

He shared the conference platform with Wales’ farming minister Alun Davies. Mr Jones admitted the pair had shared some “heated exchanges” over the Welsh government’s decision not to award direct aid to farmers hit by the March blizzards.

Mr Jones put the financial and emotional impact of the crisis on the same footing as that experienced by Welsh livestock farmers during the 2001 foot and mouth crisis.

“The FUW has made its views clear on the Welsh government’s response to this crisis and many of you know that our minister and I have had some heated exchanges regarding this matter,” he told delegates at the conference.

“The Welsh government and the FUW both know where each other stands, and I see no point in repeating what has already been said.”

But he welcomed the Welsh government-commissioned review on the resilience of the livestock sector in Wales.

UK independence a disaster for EU