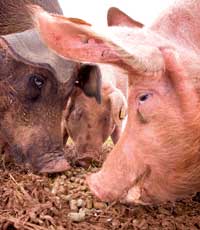 British pig producers’ costs rose at half the rate of other EU countries’ in 2008, according to BPEX research.

Pig farmers saw costs rise 12% against an EU average of 24%, but the better performance was largely due to a weaker pound, BPEX said.

Average production costs remained marginally higher than EU neighbours in 2008, but have since edged closer to parity at 133.8p/kg, BPEX figures show.