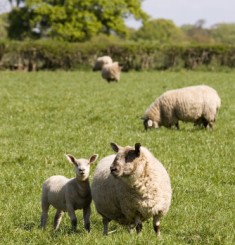 UK sheep farmers should be prepared for double tagging of sheep to be implemented for all animals born after 1 July this year, according to National Sheep Association chief executive Peter Morris.

Speaking at this week’s NSA North sheep, North Hanging Wells, Eastgate Mr Morris said a meeting between DEFRA and the EU commission on Monday (4 June) appeared to have been unsuccessful in persuading the Commission that the could rectify problems found with its system of recording sheep movements.

“The Commission’s main concern appears to be that there have been three inspections of the system in place to maintain the derogation on double tagging and on each occasion inspectors have found serious faults with the system.

“This February they raised concerns over on farm recording of sheep identification and enforcement of the system.”

However, in his opening speech Mr Morris warned DEFRA any attempts to gold plate EU regulation would be met with opposition from the industry. “Government needs to realise we know what the minimum requirements are and will not accept any system which goes beyond what is required.”

Under EU regulation 21-2004 all that is needed is for sheep intended for breeding to be double tagged. These tags must be in place by nine months of age or when the first sheep leaves its holding of birth, which ever is sooner. Double tagging will not be applicable to sheep intended for slaughter under 12 months of age, these animals will only need to carry a single tag, explained Mr Morris.

“Additionally, there is no requirement to record individual ear tag numbers of double or single tagged sheep when they are moved. Our understanding is that recording requirements should be similar to those we currently have.

“S’tags will also be surplus to requirements and farmers will simply have to record the number of sheep moved and some form of identification mark on relevant paperwork.”

There will also no need for replacement tags to carry an identical number to the one lost. “DEFRA and government vets maybe tempted to try and impose these additional recording requirements on flocks, but they will be guilty of over-regulation – something they have stated they are keen to avoid.

“Should such an attempt be made to implement this over-regulation it is likely we will challenge it in the EU courts to ensure UK farmers are not disadvantaged compared to their mainland EU counterparts,” he told Farmers Weekly.

On top of that, EID is now not likely to be introduced on 1 January 2008 as originally intended and no new date has been set for its implementation, added Mr Morris.