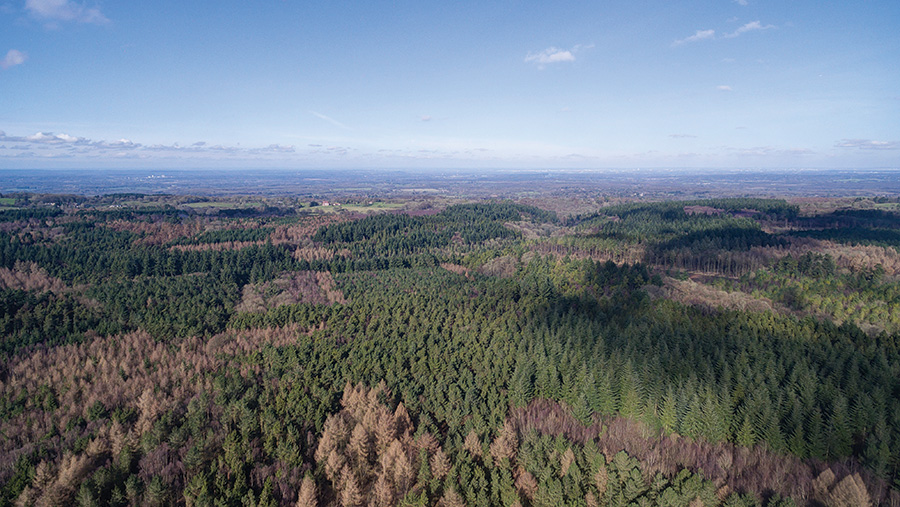 Sales of UK investment forestry have increased three-fold in the past five years to £137m, according to a joint report by Savills and Scottish Woodlands.

Nearly 52,000 acres changed hands in 2015, but like farmland, factors such as location and access are having a more significant bearing on prices paid than before, as well as timber species and plantation age.

“The market is differentiating more than it did,” says Fenning Welstead from forestry agent John Clegg & Co.

“After 10 years of very strong growth in value, we think there’s still potential but that growth will be steadier in the future.”

Forestry markets have fluctuated over the past year with the pound strengthening against the euro and the Swedish krona, leading to more imports at the expense of home-grown construction timber.

An oil price slump has also taken the edge off the woodfuel market.

But tax advantages make commercial forestry an attractive proposition still – even at a smaller scale for farmers.

Timber sales are exempt from both income and corporation tax. Furthermore, no inheritance tax is payable on the value of land and trees put to commercial forestry if it has been owned by the deceased for two years before they died.

“Due to the higher grant rates for new planting rather than restocking, and the likely shortage of timber in the medium term, there is a significant demand for planting land, which ranges between £800/acre £1,500/acre.”

One of the largest privately owned woodlands in Surrey is for sale for £3.85m.

Shere Woodlands is a single block covering 732 acres near Guilford. It is commercially managed for timber extraction with species including Corsican and Scots pine, Douglas fir, Japanese larch and various mixed broad-leaves and conifers. All of the conifer and most of the broad-leaf trees are productive crops.

There are numerous access points and the woodland is also used for sport with active shooting and stalking licences. (Strutt & Parker 020 7629 7282)

About 62 acres of commercial forestry at Beaples Barton, near Tiverton, is suitable for timber harvesting.

A further 12 acres is made up of grazing pasture, a stocked fishing lake and a small vineyard, while the principal house is divided into four units. The unit has a guide price of £1.2m for the whole. (Stags 01769 572 263)