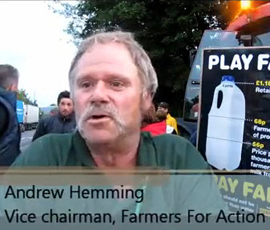 Budget supermarket Iceland has become the first middle-ground retailer to agree to open its accounts to farmers discuss the fairness of the price it pays for milk.

Bosses at the supermarket chain agreed to lay its full accounts bare to Farmers For Action and other members of the dairy protest coalition after more than 300 farmers blockaded a distribution centre in Warrington, Cheshire, on Thursday evening (2 August).

The good news for farmers came on an evening of protests, which also saw a blockade at a Farmfoods milk distribution site in Solihull, near Birmingham.

Iceland hopes to prove to producers that it is paying a fair price for milk and it is actually processors who are withholding a fair share of the milk price.

FFA president David Handley said the move by the retailer – which came late on Thursday after lorries were prevented from entering and leaving the centre for several hours – was significant as it would finally reveal where the money was in the supply chain.

“Iceland’s managing director has said the retailer has seen none of the benefits of any of the price cuts put on farmers in May or June,” he said.

“He says Iceland is paying processors a price for milk which would allow the cost of production figure to be paid to farmers.”

Mr Handley said representatives from FFA and the NFU would be shown the accounts on Monday or Tuesday, which would allow them to judge the cost price of milk and go back to processors to “ask where the money is”.

“This is better than we could have hoped for,” he added. “It’s the first middle-ground retailer to open their books and the rest of them have to follow suit.

“We are starting at the bottom and working up to find out where the money really lies.”

Meanwhile, some 200 other dairy farmers blockaded the Farmfoods distribution centre in Solihull on Thursday evening.

FFA vice president Andrew Hemming said despite efforts by farming groups, the retailer had failed to respond to requests to discuss milk prices.

“We are determined to put pressure on middle ground retailers who are refusing to talk about paying more for their milk,” he said
“This is just the start. We will carry on doing this until we get some answers.

“We need to get the bottom end of the market up to the better payers – there’s a massive gap between non-aligned contracts and that can’t carry on.

“If people aren’t prepared to talk we will go down other routes. It’s annoying that we keep having to protest, but we get results.”

Dairy farmer Andrew Hall, who attended the protest in Solihull, said farmers were in a desperate situation which would only get worse unless the middle ground retailers addressed their milk prices.

“The rising price of feed thanks to the wet weather hampering yields could push many producers too far,” he said.

“Last summer’s drought and this summer’s rain means forage is running low – it will be desperate for a lot of people come winter, that’s if they survive these price cuts.

“We will carry on with these protests until we get some movement. No one wants to throw milk away, but the next action will be to say to retailers that you are not having the milk.”