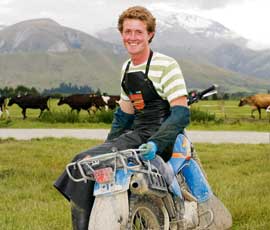 Nine months ago 23-year-old George Brown won the first ever Farmers Apprentice competition and walked away with £10,000 to kick-start a career in farming.

Since then he has been working New Zealand earning his stripes as a dairy herdsman. Over the summer he spoke to Farmers Weekly’s Will Frazer about the realities of becoming a first generation farmer

What have you been up to since winning the Farmers Apprentice competition?

I’ve been working as an assistant dairy herdsman out in New Zealand and have learned a huge amount about grass and how to control on-farm costs. I have now been offered the job of herd manager on a 2,500 cow dairy farm in New Zealand.

I still plan to buy some stock back in the UK with the prize money but I have put this back a year because of the opportunities presented in New Zealand. The plan is to return to the UK in 2015 and buy 15-16 month old empty heifers and get them back in calf.

What advice do you have for people looking to get started in farming?

It’s so important that people recognise that you are hardworking, keen, loyal and sort of person they’re going to want to employ. I’ve tried to treat myself as an asset which I want to make valuable so that people are going to want to invest in me and provide me with opportunities. Look at yourself, identify your weaknesses and figure out what’s holding you back from becoming a good investment and focus on those things.

Do you think it’s possible to overcome the commonly perceived barriers to getting a foot on the farming ladder?

Obviously there are barriers. It’s not cheap to get into farming and it’s not easy to get hold of land but they are massively overplayed. From my experience it’s entirely a mindset thing and too much is made of the problems in the system.

If you sit down, figure out what you’re good at, find yourself a little production niche or area of expertise that you could become really good in, then people are going to invest in you and opportunities will come your way. If you’re keen and want to progress then there are plenty of opportunities out there and those barriers are definitely surmountable, if not non-existent.

How do you feel your lack of farming background has impacted on your progress in farming and what would be your advice to those also starting out with limited experience?

Eighteen months ago I used to think having no farming background might be a problem and I should go into another job and come back to farming at a later point with more financial backing. But I couldn’t disagree more with that attitude now.

I think there are fantastic opportunities out there for first generation farmers. The lack of family ties and the lack of preconceived ideas are things that can only be beneficial in terms of helping you learn, progress and take opportunities. I have been really lucky because the only thing holding me back was what I was prepared to put myself through or where I was prepared to go.

There were no ties forcing me to go to a certain area, which meant I could entirely pursue what I thought was the best opportunity. That freedom and open-mindedness is something any other first generation farmer has in their favour and it’s a massive head start.

Do you still stand by your view that there’s no way a career in the city is better than a career in farming?

Yes, I definitely stand by that. In terms of the opportunities I’ve been given for progression, taking responsibility, learning about management, dealing with people and finance I’ve had far more opportunities thrown at me than my ‘city’ friends.

In terms of job satisfaction I get far more because every day I can see what I’ve done and there are tangible results. If you want to look at salary then maybe they are slightly ahead of me, but then if you look at non-financial benefits like a house and not commuting then it’s actually pretty close.

In the long-term I think farming offers far better structured career paths if you’re in the right sector than any city job. In dairy farming specifically, the opportunity for me to run my own multi-million pound business in the future is a massive attraction.