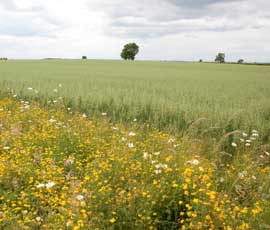 The spectre of a compulsory set-aside replacement across England has been raised following a visit by French ministry of agriculture officials to UK farms.

England’s farmers face the prospect of following in the footsteps of their French cousins, who must ensure 3% of their land is covered by environmental features to mitigate the loss of set-aside. The figure rises to 5% next year.

The French rules – designed to meet EU requirements that member states retain the environmental benefits of set-aside – are among the most onerous in Europe. France is under increasing pressure from its own farmers to ensure other countries follow suit.

UK industry leaders were keen to highlight the voluntary environmental measures already being undertaken by English farmers during a visit by French government officials to Pleasance Farm, Kenilworth, Warwickshire.

“It is very important for us to have this kind of mission,” said Mr Riou. Benchmarking different practices from different countries could determine the most effective way of retaining the benefits of set-aside.

The French approach is being closely monitored by Corrina Gibbs, co-ordinator for the Campaign for the Farmed Environment, the industry-backed initiative to stave off a compulsory set-aside replacement.

The campaign aims to increase the amount of English farmland under voluntary environmental management by 30,000ha (74,000 acres). Farmers are being urged to sign up to environmental stewardship and retain any uncropped land.

Recent figures showed the campaign was falling short of its targets. Ms Gibbs said: “We need more farmers to get involved. The government has made it clear that it will consider a regulatory approach unless the targets are met.”

Robert Gazely, farming consultant with Strutt & Parker, said failure to join the campaign would result in the industry throwing away its chance to act. It would also increase the burden of red tape and regulation on agriculture.

“We believe farmers cannot afford to relax or feel secure in the fact that food production is back on the agenda, but must focus on simultaneously protecting and enhancing the environment,” he said.