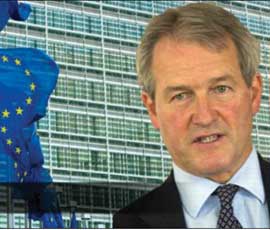 Speaking at the Great Yorkshire Show Mr Paterson said 36 farming organisations which make up the CAP coalition were “fighting a very well-orchestrated campaign”.

“They’re doing a great propaganda campaign. They’ve got [the farming press] all wound up – all your leaders attacking me,” said Mr Paterson.

The CAP coalition, which includes the NFU, Country Land and Business Association and the Tenant Farmers Association, met at the show to discuss how the current proposals would affect English farmers. The focus of the discussion was the government’s aim to move 15% of the budget for direct support in England, known as Pillar 1, into the budget for rural development, Pillar 2.

Mr Paterson said shifting some of the budget from Pillar 1 to Pillar 2 would keep rural economies going by funding things like rural broadband, which would also benefit farmers.

He pledged to work more closely with farming organisations to make sure these schemes do help the farming community, deliver an environmental benefit and increase skills in remote rural areas.

But the coalition said Mr Paterson’s plans would leave English farmers out of pocket. Coalition members argued that Mr Paterson should at least wait until more details were agreed on what each Pillar involved before making a decision. That decision has to be made by December, but the percentage to be modulated – moved between Pillars – can be changed in future years.

The EU rural development budget for the next seven years has been cut by 22.5%, leaving a “gaping hole” which Mr Paterson was trying to fill, said coalition leaders.

However, moving money away from direct support would put English farmers at a massive financial disadvantage compared with their EU counterparts, they added.

NFU deputy president Meurig Raymond said: “When you think our European colleagues are [currently] probably £40, £50, £60/acre [better off] and if they do transfer that 15% it’s going to put us at a significant disadvantage.

“When some of our EU colleagues can use reverse modulation back from Pillar 2 to Pillar 1, how are we supposed to compete and operate in that environment where there’s a huge amount of investment required on farms if we’re going to increase our productivity?”

Mr Raymond spoke of a feeling of frustration among farmers.

“Mr Paterson wants us to focus on making the sector more efficient and productive than its global rivals. I just don’t see how cutting English farmers’ payments and channelling more money to environmental schemes that take land out of production and increase costs will do that.

“We know that the government has to set the deduction rates by the end of the year. Between now and then, we would like to see DEFRA set out its priorities for rural development, how government will help us deliver, or at least not hamper, the right conditions for farmers to produce more British food and what is needed by way of transfer rates,” he added.

The DEFRA secretary said he intended to make the proposals as simple to implement as possible, as the last system was “horrendously complicated” and cost the UK €950m in fines.

Past problems were another reason it was so important to get it right, according to the coalition.

The “debacle” created during implementation of the previous reform had a lasting impact on farmers which was difficult to recover from, said George Dunn, TFA chief executive. Mr Dunn is also chairman of the Farming Community Network which helps struggling farmers and their families.

Putting aside the issue of modulation, the agreements made so far were not to the benefit of farmers in the UK.

“The framework, which we have not seen the legal text of yet, has not been a good deal for UK farmers,” said Mr Raymond.

News, video and background on the CAP reform