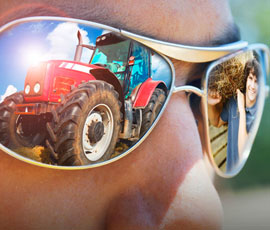 If you’ve picked up a copy of Farmers Weekly or visited FWi at all in the last year, chances are you’ve heard something about the Farmers Apprentice, a brand new web-tv series sponsored by McDonalds.

But what you might not know about the Farmers Apprentice, is why on earth Farmers Weekly and McDonalds embarked on this project in the first place.

Since 2009 we’ve been bombarded with gloomy predictions for the future of the ageing agricultural workforce. The numbers varied slightly from report to report, but the overall message was loud and clear: 50-60,000 new entrants would need to be found in the next 10 years to maintain the industry. Headlines shouted about the “crisis” and heads were scratched over the “critical shortfall” but the question remained. How could farming promote itself as a top career destination to a generation of young people lured by city jobs and city salaries?

And so the Farmers Apprentice was born…

First we scoured the country to find 10 young people who we believed had all the necessary skills to be a farmer of the future. We weren’t looking for much, just entrepreneurial, enthusiastic, smart, business-minded, natural communicators who loved the outdoors.

Next we brought them to a week-long farming “bootcamp” where we mentored and tested them on some of the infinite number of real-life challenges that they could face on an average day on the farm.

Then we produced a series of web episodes that followed their every move during the competition – the highs, the lows, the excitement, the sweat, the tears, the friendships and the fun – in short, everything that makes a career in farming unlike any other.

In the final episode (on the 20 December) we’ll reveal which of the 10 apprentices has won the overall prize – a cheque for £10,000 to invest in the start of their farming career. But we hope the competition will be even bigger than that.

We want everyone and anyone to watch the series and see first hand the opportunities that exist in agriculture. We want them to share it on Facebook, talk about it on Twitter, tell all their friends about it and make a noise about farming.

And in a few years time we want to be writing stories in Farmers Weekly with very different headlines, that show farming careers are at an all-time high.

Go to www.farmersapprentice.co.uk/episodes to catch up on Episode 1 and 2.

The next episode will be screened LIVE at 7.30pm on Tuesday 11 December. Go to www.farmersapprentice.co.uk

Hear direct from the finalists and judges by joining our growing online community:

The McDonalds Progressive Young Farmer Training programme (Farm Foward) is running for a second year and students from agricultural colleges across the country have applied for the 2013 intake. The 12-month training programme will provide those who are successful in their application with the opportunity to learn a range of farming and business skills and work across the whole food supply chain, from farm to fork.