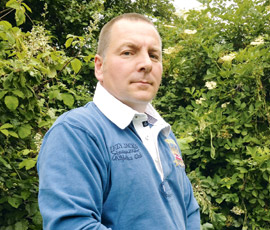 A farmworker has been awarded £38,000 for underpayment of wages after working an average 55-hour week at a farm in Berkshire.

Peter Bailey, 42, was employed as a tractor driver and stockman at Hillfoot Farm, a 120ha mixed beef and arable farm in Bucklebury, for more than 22 years.

But Mr Bailey said he was given no contract of employment and was asked to work long hours, averaging about 55 hours a week. At busy times of the year such as calving and harvesting he would work 16-hour days.

Most Februarys he was left in charge of the farm’s herd of 50 Charolais cattle for up to two weeks while his boss, farm manager Andreas Hempell, went on holiday.

Despite being on call day and night seven days a week, Mr Bailey, a father of one, was paid a basic salary for a 40-hour working week, which was below the agricultural minimum wage (AMW) rate applicable for his grade.

Other perks of the job included his employer paying his home electricity bills, filling his car up with white diesel once a month and supplying his family with beef from the farm.

But in 2010, Mr Bailey began to question his salary after finding out local farmers were being paid £10,000 a year more than him for working in similar roles.

When he asked Mr Hempell for a pay rise, Mr Bailey said he was offered an additional £200 per month. He also claimed his boss advised him to contact the Agricultural Wages’ Board (AWB).

Mr Bailey contacted the AWB, who told him that by law Mr Hempell should have given him a written contract for a 39-hour week – and he should have been paid extra for working any overtime.

The AWB referred him to DEFRA, who reviewed his case and told him he had been underpaid for years and was eligible to receive a substantial back payment worth tens of thousand of pounds.

Mr Bailey went back to his employer and asked for a back payment, but said the money he was offered fell below his expectations.

DEFRA served his employer, farm owner Barbara Riepl, with an enforcement notice ordering her to pay £56,409 within 28 days unless they wished to challenge the order at an employment tribunal.

However, Mrs Riepl decided not to pay the money and the case was listed for a claim of underpayment of wages at an employment tribunal sitting at Reading on 19 June this year.

Before the case could be heard, however, lawyers representing both parties agreed an out-of-court settlement that day. Mrs Riepl agreed to pay Mr Bailey £38,000 for “underpayment” under section 19C of the National Minimum Wage Act 1998.

In June 2011, while the dispute was ongoing, Mr Bailey was signed off from work indefinitely suffering from depression and anxiety, brought on by the stress of the dispute. Eventually, he handed in his notice and left his job in December 2011.

Mr Bailey, of Beenham, West Berkshire, is now working as a self-employed farm contractor in Hampshire.

“I thought I’d be working in that job in Bucklebury for life. I never thought anything like this would ever happen,” he said.

“It’s only since I went self-employed that I began to realise the number of hours I was clocking up. Farmers need to realise they must keep records of their hours, because no one else is going to do it for you and you could lose out big time.

“The whole ordeal took two years. It was a very stressful period in my life.”

Mr Hempell declined to comment when contacted by Farmers Weekly.

DEFRA said it could not comment on individual cases. But a spokesman added: “Abolishing the Agricultural Wages Board is in the long-term interests of the farming and horticultural industries and their workers.

“Like all other workers across the economy, they will be protected by the national minimum wage and modern employment law.”

How will wages and conditions be fixed after the AWB