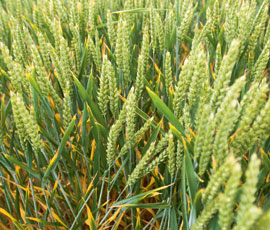 Milling wheat growers have been urged to consider locking in to firm prices for the 2012 crop as an insurance policy against rising input costs.

Production costs could be around £130-140/t before drying costs and growers should be looking at future prices with this in mind, AHDB senior analyst Jack Watts told the HGCA/Nabim milling wheat conference today (1 March).

“Next year is the one to watch – we have record forward prices and we could see a great planting response. We have a massive increase in production costs as well.

“Volatility has no respect for any relationship between market prices and cost of production, 2012 had the potential to replicate 2009 when we had high production costs and a big drop in market prices,” he said.

Looking to the end of the current cereal year, a lack of carryover of quality wheat everywhere apart from the US would stress the world market, with the UK possibly needing to import breadmaking wheat, said Mr Watts.

The latest DEFRA/AHDB figures confirm the tightening stock position for the end of this season, with UK wheat exports hitting 1.89m tonnes by the end of December compared with the original export forecast of 1.3m tonnes for the whole of the marketing year.

There would be a new all-time-low stock carryout and the very tight end of season would mean that any indication of a late new crop is going to create volatility in the short term.

Growers should expect further volatility throughout 2011, said Mr Watts. Grain markets were being buffeted by political, currency and speculative factors as well as supply, demand, area, quality and weather.

For the 2011 harvest, it would be fair to expect some recovery in Russia, which is keen to resume its export trade. If, as it currently predicts, Russia produces 86m tonnes of grain, it may be able to export 7-8m tonnes, said Mr Watts.

Strategie Grains forecasts the EU will export 20m tonnes of wheat from the 2011 crop, which was an ambitious target, but achievable given good quality and a competitive price.

Volatility meant that using the Cereal sellers’ checklist was more important than ever, he added.