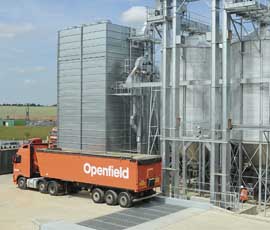 Speculation about the size of crops around the world has kept grain markets on edge over the past week, despite a relatively tight feel to domestic markets.

Old crop prices firmed late last week following reports of reduced Ukrainian exports supporting already competitive US wheat, but then slipped on the back of some profit-taking and suggestions that milder weather could allow Russia and Black Sea regions to return to export markets.

With US corn prices being a major driver of other grain markets, traders were also eagerly awaiting the US Department of Agriculture planting intentions survey due at the end of this week. Analyst Agritel said corn plantings were expected to reach a record 94m acres, the highest since the Second World War.

“There’s a bit of a stand-off at the moment,” Gleadell managing director David Sheppard said. “There is still plenty of wheat in the world and if we see a big plantings figure in the USDA report, it’ll probably have a bearish impact. But we can’t afford any problems in any crop area, particularly US corn.”

European markets were fairly tight, he said, and the UK supply and demand balance could also be so, especially if the two major bioethanol plants open as planned later this year. Once up to capacity, these will take more than 2m tonnes of wheat.

Official HM Revenue & Customs data showed the UK exported 329,000t of wheat in December, the highest volume for the month since the 2008-09 season. That followed a two-year monthly high in November and took total exports for the first half of the 2011-12 marketing season to 1.584m tonnes, almost two-thirds of the 2.54m tonnes surplus.

“Exports have been phenomenal because UK wheat was very good quality last year, which makes it very marketable,” Fengrain managing director Rob Munro said. “Supply and demand here will be tight, but we’re surprised that cash buyers aren’t really showing their hand at the moment. There seems to be some general resistance among buyers to pay higher prices.

“February to May is the weather watching season, so we’ll wait to see how crops have fared over the winter.”

Oilseed rape markets remained firm, buoyed by weaker sterling, uncertainty about winter crop losses in parts of Ukraine, and another downgrade to the size of the Argentine soya bean crop.

Old crop rape was worth around £365-370/t ex-farm on Wednesday, up about £5 on the week. New crop prices were just shy of £350/t, and with oil bonuses growers could be looking at total price close to £400/t, Mr Sheppard said.

New crop rapeseed was likely to be in strong demand throughout Europe in 2012-13, largely due to continued strong demand from the German biodiesel sector. Weather problems in southern Europe and Black Sea regions looked set to underpin rapeseed demand until there was a clearer picture of what winter kill had taken place, if any, he added.