All from different backgrounds but with a shared determination to succeed in agriculture, we have found out how they feel about being new entrants at such an uncertain time for farming in the UK.

In the first of a three-part series, Ben Pike spoke to new entrant Lee Smith, 31, about how it feels to be taking control of his own unit and continuing to build on the giant strides he has already taken to forge a future in farming. 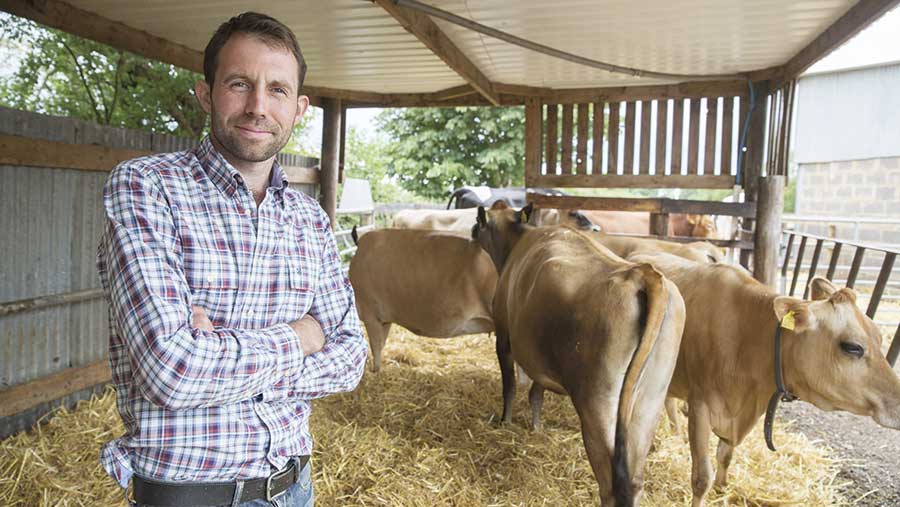 It’s third time lucky for Cambridgeshire young farmer Mr Smith, who missed out on winning a council tenancy for the past two years.

On 11 October he and his fiancée Jenny Mackay will get started with their plan to build a mixed livestock and arable enterprise at 148-acre Wolvey Holes Farm at Coveney, near Ely.

From a standing start he has already made huge progress, having spent the past 11 years working in agriculture to build experience while investing any earnings in buying livestock.

“I used to go out with my granddad and uncle who worked on arable farms driving tractors,” Mr Smith said. “After that I never wanted to do anything else.

“From school I went straight to a farm to work and learned loads with AG Wrights at Haddenham.

“They had a herd of 400 Herefords, so that was the first time I got into the livestock side.”

He saved money and bought a handful of cattle and sheep, grazing them on any available parcels he could find from local farmers, plus a couple of acres he managed to buy.

“I was really lucky because there were a lot of people with small parcels of grassland they needed grazing off or that I could make hay from.”

Fast forward to 2017 and the results of his hard work are impressive.

“We’ve got 100 head of cattle and 250 breeding ewes now. I still only own a couple of acres, the rest is rented which is OK but you never know if you’ve got it from one year to the next.”

A tenancy was an obvious goal; Mr Smith had built a reputation as a good tenant on short-term grazing agreements, but competition for a five-year authority tenancy was stiff.

After two rejections in two years, he took a course with the Prince’s Trust charity to learn about farm benchmarking – a strategy that he thinks paid off.

“Consultants spoke to us about managing farms and benchmarking business figures. There were some good talks, which were really interesting and definitely helped with the tender.

“We were assigned a mentor who happened to be involved in placing ex-council farm tenants, so he knew his stuff and was really good at putting things together.”

The couple enthuse about traditional rotations and farming systems.

“We’re focusing on improving the soil structure by having livestock on the farm.

“It’s currently all down to arable but we’re going to put 40 acres into a temporary grass rotation and put in some sugar beet. The sheep can graze the tops of those and we’ll put some stubble turnips in.

“It should mean the farm gets the benefit of a fully mixed system.”

Miss Mackay works for the Wildlife Trust and is enthusiastic about the environmental and conservational potential on the farm.

Mr Smith added: “We have been talking to the RSPB and we plan to plant wild bird mixes and also manage hedgerows and cultivate margins for turtle doves.

“Looking after the conservation is something we can do to make ourselves more resilient if there isn’t any support for farmers going forward.”

Direct payments aren’t something Lee has ever had the benefit of.

Despite the fact that he now has a regular rent to pay, he plans to continue to build a business that isn’t subsidy dependent.

“We will apply for BPS entitlements but will try to make ourselves resilient so that we can adapt to whatever the new situation is once we leave,” he says.

“Brexit was obviously a subject that was asked about during the interviews with the council, but so much is unknown at the moment.

“I said that I thought it was a really good opportunity to open some new markets, but we can only wait and see what happens next.”

The next Cambridgeshire County Council opportunities for new tenants will be in January 2018.