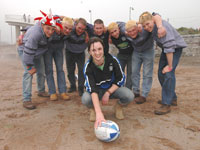 Thousands of Young Farmers are heading to Torquay for the biggest event in the YFC calendar.

The agm weekend has returned to the Devon venue after two years in Blackpool – and is expected to draw nearly 4000 members from across England and Wales to the seaside resort for three days of business and fun.

Highlights will include the Agriculture & Rural Affairs Forum which takes between 11am and 3pm tomorrow (Saturday) and the national drama finals which will showcase talented young actors from 2pm onwards on Sunday.

Club T-shirts will also be a big part of the occasion and, seeing as there’s a safari-theme to the event, FW is running its very own Big Game Hunt.

• See rolling news, hundreds of pictures, videos, blogging and twittering from the event on our special YFC web area during the course of the weekend.