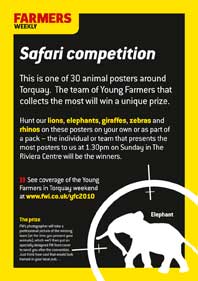 Going to Torquay for the big Young Farmers bash this weekend?

If so, you’ll want to take part in FW’s exclusive Big Game Hunt competition. And today, for the first time, we can reveal the competition posters which we’ll be putting up in prominent places around the town.

The individual young farmer (or team of young farmers) who collects the most and presents their haul to us at the prescribed time (details of which are on the poster) will be the winner.

The prize is the chance to have your (or your Big Game hunting team’s) picture taken by FW’s photographer and we’ll then put this image on a specially designed FW front cover.

So, happy hunting, whether you’re taking part in the competition on your own, or as part of a team.

Collect as many animal posters as you can and you could be on your way to collecting this trophy prize.

• You can also submit a picture of your Club shirt ahead of the weekend – as we’ll be publishing a selection of the best.