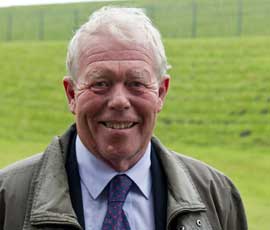 Its unique ability to teach life skills is one of the reasons why the National Federation of Young Farmers’ Clubs (NFYFC) has such a bright future, according to its new president Poul Christensen.

Membership boosts self-confidence, teaches people responsibility and helps them learn how to relate to others, said Mr Christensen.

“This movement is so inspirational and so powerful,” he told Farmers Weekly on the eve of succeeding Matt Baker in the role.

“Many of our industry’s leaders have been members.

“Through the generations, it’s provided an opportunity for people in isolated rural areas to come together and that won’t change, whatever happens with new technology and communication methods,” he added.

Mr Christensen, from a tenanted family dairy farm in Oxfordshire, vowed to help both the national federation and individual clubs raise their profile.

“At a ‘micro’ level, I’m also incredibly keen to develop the potential of individual members, not just those in high-profile positions.”

Poul, who joined a young farmers’ club in 1954 and was chairman of the Lye Green group, Sussex, in 1956, urged the next generation to grab the opportunities on offer.

“They have to go out and make the world theirs. No one owes them a living, but the future is theirs, the world is theirs.”

All four of his children have been members – and two of them met their spouses through young farmers’ clubs. So, is it still something of a marriage bureau?

“Yes, and we shouldn’t be ashamed of that. Anyone who’s using online dating – they should join the Young Farmers.”

And, as for the YFC AGM 2013, what will he most remember from Blackpool?

“Standing on the balcony above the dance floor and watching thousands of people dancing. The power and enthusiasm was amazing – you could have powered the UK for a week with that energy.”

More from the YFC AGM

For photographs, videos and the latest news from the Young Farmers Conference in Blackpool see our dedicated page.