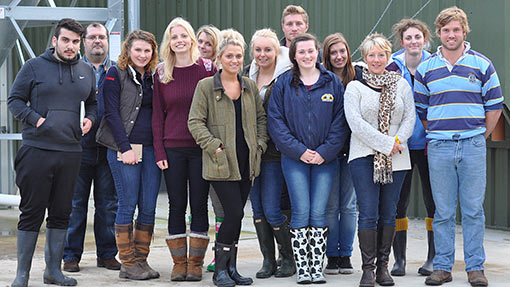 Poultry World’s adopted new entrant, broiler farmer Harry Shepherd, has given final-year students of animal science a tour of his farm and told of how he got going in business.

The day was set up by Dr Jonathan Guy, of the agricultural school at Newcastle University, as part of a study tour of the North, following our coverage of Harry’s farms in recent issues of Poultry World.

He said the trip was to prepare students for their final, most challenging, year and incorporated “some of the most progressive animal centres in the north”.

Mr Shepherd set up in broiler farming in September 2013, having gained finance to build his first shed. It was only a few crops before he achieved a 400-plus EPEF flock, an accolade relatively few in the UK have achieved.

Staff and students spent a couple of hours touring the farm and hearing about Harry’s journey from self-declared “arable boy” to award-winning chicken grower,

One of the students on the study tour, Panagiotis, from Cyprus, said: “Visiting Harry’s farm was my favourite moment of our study trip to North Yorkshire – not only educationally, but also culturally because we saw how a young man, only a little older than us, can build his own business using the latest technology.”

Other visits included a trip to a leading flat-racing trainers’, and a look around a bull stud.