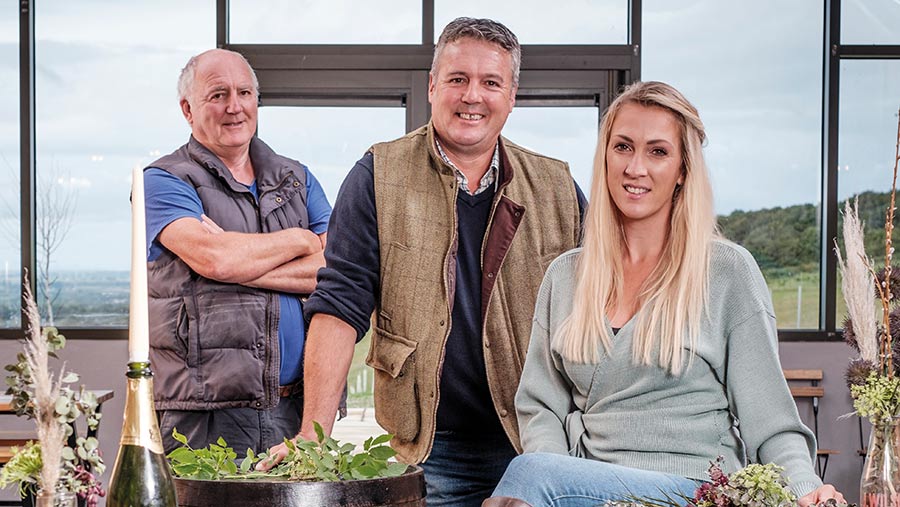 Despite not holding a wedding in 2021 until 1 May, Alice Maltby, Tom Wilson and the growing team at Little Wold Vineyard have been pressing on with numerous building projects to cater for a crammed wedding season and brimming calendar, with bookings well into 2023.

When the weddings and wine tours were suspended at their vineyard high above the little village of South Cave in the East Riding of Yorkshire, the 2020 Farmers Weekly Diversification of the Year winners needed to come up with innovative ways to generate revenue.

In the process they took on some significant construction projects and employed additional staff to keep the business growing.

The biggest job was more than doubling the size of Little Wold’s wine-tasting room, which now allows more than 130 guests to be seated comfortably inside.

The space has a dual purpose, with a bar, toilets and kitchen for both weddings and wine tasting groups. The room can be divided to hold two events simultaneously.

The building work wasn’t without its challenges, especially when the Yorkshire winter set in.

The contractors struggled to get materials up the steep inclines of the vineyard and the existing roadways couldn’t cope with the traffic.

Tarmac was laid on a large stretch on the steepest slope to keep lorries moving and ensure the venue was ready to open in time for the season.

Another large outlay involved securing a permanent water source. Previously water was ferried up by bowser before an event.

After assessing the options, which included laying a water pipe more than a mile from the village, a borehole was deemed the best solution.

It took two digs – the first 120m hole failed to tap into a useable source, so they had to shift to another target area and drill again.

The third project was constructing the shell of an in-house winery, with Tom and Alice both attending a course at Plumpton College in Sussex to swot up on the process.

New apprentice Cameron Webster is studying for a level 3 Crop Technician in Viticulture qualification at Plumpton.

The plan is to start with a small batch to get the winemaking process nailed, as they don’t want to jeopardise the standards they have achieved by taking everything in-house straight away.

Extra land has been taken on and prepared for more vines, with the total number up to 16,500 and production estimated at 30,000 bottles once everything is up to speed.

With few events taking place and banks reluctant to lend to the hospitality sector, keeping cashflow ticking over hasn’t been easy, meaning the Little Wold team have had to be creative with funding.

However, a stacked wedding calendar has given them the confidence to invest for the future.

When weddings and wine tasting were taken off the menu, Little Wold took the plunge and launched socially distanced picnics among the vines.

This clever addition allowed groups of up to six people to meet in the vineyard and brought another way of getting their wines in front of customers.

Customers pay online and are sent a table number and map of the vineyard. The table is prepared with a hamper filled with freshly sourced local produce from butchers and the nearby Wensleydale Creamery, and wine chosen at the time of booking.

The pitch is secured for two hours and there is a guided tour on the map.

To start with, the picnics were arranged on alternate Saturdays and Sundays, allowing for some breathing room to switch to the best day in case of bad weather.

The team plans to carry on the venture during the summer, with picnics starting at £45 for a couple. These will be held on Sundays so they don’t clash with Saturday weddings.