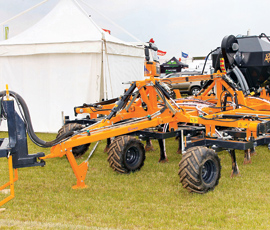 AZ Farming was one of several foreign-based manufacturers making their debut on British soil at Cereals 2013.

Having built drills, straw harrows and cultivators in Italy for the past 13 years, the maker has recently relocated production to Slovenia and is looking to make a dent in the UK drill market.

According to AZ, farmers in Italy, France and eastern Europe rate the drills highly for their simplicity. On show was a 4.5m one-pass version carrying a 2,200-litre hopper split 65:35 in favour of seed.

The company builds its own metering systems, which are different to the widely used Accord system. Seed is gravity-fed down separate tubes for each coulter in the base of the hopper before being blown to the coulters, which is said to maintain even distribution.

Front wheels and a rear roller are used to control the working depth of the three rows of tines that operate slightly below the target seeding depth.

The three independent drill sections carry five legs each and move independently of one another. Just 140hp should be adequate to pull the 3.7t drill and the starting price is €40,000. There’s also a 6m version that has the same features over a wider working width.

See more news and kit from