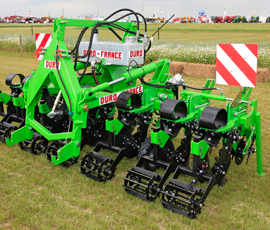 Suffolk firm Landquip is normally best known for its sprayers and Nitro-Band liquid fertiliser placement  system, and this year’s Cereals event saw it make the logical move into the strip-till cultivation market.

It has become the official UK importer for French maker Duro, which has been selling single-pass strip-till equipment for the last five years.

The system is aimed at maize, rape and sugar beet growers and works in tandem with either the Nitro-Band system or a solid fertiliser placement system.

The idea is to get a true one-pass system that can work in all conditions. First, a spring-loaded disc cuts through the trash, while a notched disc next to it moves crop residue to one side, leaving a clean strip.

A 15mm wide leg then cuts a narrow track down the strip. This has either a 100mm or 170mm wide winged blade that works down to 100-250mm to loosen and aerate the soil. Finally, two 350mm plain discs (or 450mm wavy discs) further till the soil and are followed by a 300mm wide crumbler roller. The ground between is left untilled.

Users can fit a variety of different of toolbar-mounted precision seeders on the back. This could be a fixed frame with up to six strip-till units, a retractable frame with 6,7 or 8 units or a hydraulic frame with 8-12 units.

There’s also a trailed model with integral hydraulics and a rear pto-drive 3-point linkage on to which a seed drill can be mounted.

This would make it a high-speed, single-pass strip-till seeder that could be used with or without dry or liquid fertiliser placement. Prices have yet to be set.