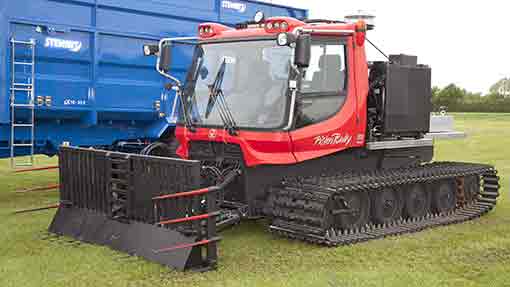 With three Pistenbully piste-basher type vehicles at Grassland & Muck, you could be forgiven for thinking that this somewhat exotic type of vehicle is becoming common in the UK. Off-piste Agri, which brings them in, says that it has sold two already in the UK with further sales in the pipeline.

This X-track model has 86cm tracks with a herringbone rubber cleat design and a 3m overall width to allow it to legally go short distances on the road. It weighs 11t and has a 330hp engine.

Though some farmers on the Continent have used them for arable field work, their use in Europe and the UK is pretty much about providing very effective compaction on silage clamps. There are reckoned to be 720 of these machines working on silage clamps in Germany alone and the company is targeting the 180 AD plants now operating in the UK.

The other UK use is for reed cutting in wetland and bogs, and Devon company Ag Bag already has a machine at work.

The main benefit that these machines bring, says Off-piste Agri’s Harry Kester, is good clamp compaction thanks to the shuddering and flapping effect of the tracks. Tests of clamps, he says, have shown that a tractor-consolidated maize clamp typically has a density of 680-900kg/cu m while a Pistenbully-consolidated one has a density of 1,050kg/cu m.