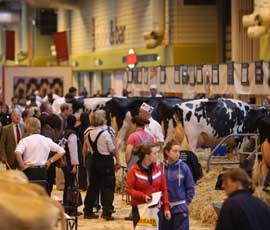 The Livestock Event attracted a record 9,130 visitors on Wednesday, despite critics claiming its date change to July would deter busy farmers.

“Rescheduling the event from its traditional September date to July has been a huge success, with visitor numbers on the first day the highest in 10 years,” said Nick Everington, chief executive of the Royal Association of British Dairy Farmers.

“In addition, moving the cattle into the trade halls was an overwhelming success, with 190 dairy stalls booked and 79 stalls for the inaugural National Charolais Show. We have had nothing but praise from cattle exhibitors, who enjoyed the very modern facilities and once again, we have had a clean show.”

He adds: “We look forward to continuing to build on the event’s success in July 2014 and creating the opportunity for all livestock farmers to get away from their farms to gain more knowledge and do business that is going to help them to progress their enterprises,” he added.

All the news and reviews from the Livestock Event