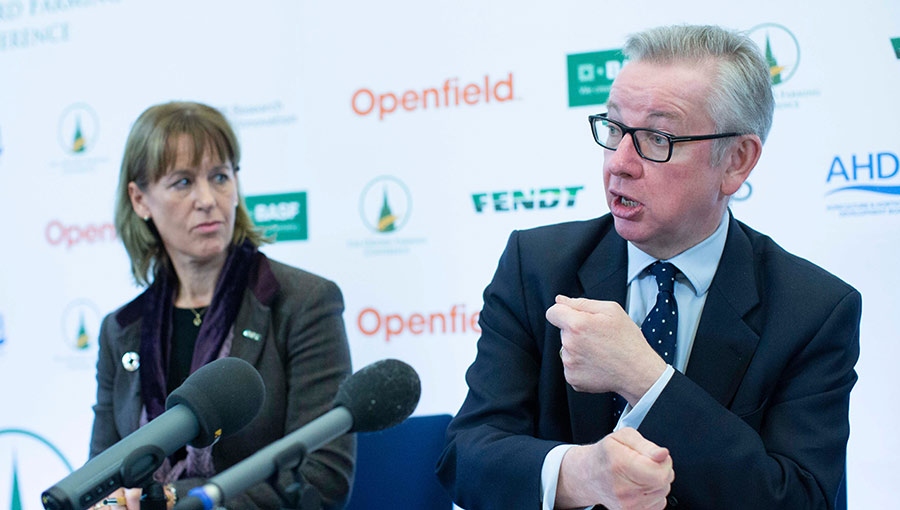 Farm leaders have warned the government that domestic food production must be a strategic priority at what is a critical time in British history.

The warning is contained in a major report due to be launched as more than 1,000 farmers gather for the NFU’s annual conference in Birmingham on Tuesday (19 February).

The Future of Food 2040 report highlights the importance of establishing a domestic agricultural policy for farmers to thrive after the UK leaves the European Union.

Policies are needed that enable the farming industry to increase its productivity, profitability and resilience in an increasingly volatile world, says the study.

In her keynote speech to the annual conference, NFU president Minette Batters is expected to warn that leaving the EU without a deal would be a catastrophe for UK farmers.

Defra secretary Michael Gove is due to address conference delegates from the same platform immediately after Ms Batters’ opening address at the Birmingham ICC.

The Future of Food 2040 report says UK farming will undergo major changes during the next two decades – at a time of great uncertainty exacerbated by the repercussions of Brexit.

Changes in consumer trends, technology and new markets will bring opportunities for farmers, the report says.

But it warns that a coherent domestic agricultural policy is vital if British growers and livestock producers are to thrive outside the EU.

The relationship between farm leaders and Defra has become increasingly fraught as Brexit looms.

With no deal in sight, concern is mounting that farmers could be exposed to a flood of cheap food imports while facing a trade embargo or high tariffs on exports.

Looking beyond Brexit, the report delves into how changing trends will affect food production, what consumers will be eating and how they will be buying it.

Robots, vertical farms and virtual fencing will help maximise productivity, data collection, precision and efficiency – all while benefiting the environment, it says.

She said: “This report is a catalyst to encourage us all to start the debate about our food and our future so we can start to plan ahead.

“It is also a reminder for government, at a critical time in British history, to put domestic food production as a strategic priority in all policy-making.

“This includes a future domestic agricultural policy that must enable farm businesses to take advantage of the many opportunities that will present themselves over the coming years.”

Farming was a progressive industry looking ahead for new opportunities, said Dr Graham. The next 20 years would see potentially seismic changes in all aspects of society.

A rising global population and the need to mitigate the impact of climate change would provide opportunities for farmers to increase productivity and reduce their environmental impact.

Innovation would be key for the NFU to reach its ambition of net zero agriculture by 2040 – effectively cutting out all greenhouse gas emissions.

“Even now there are technologies being developed that can care for crops on a plant-by-plant basis or control the grazing of cattle without physical fences,” said Dr Graham.

“By 2040 this type of technology will be commonplace in farming.”

She added: “We will also see a significant shift in how businesses are managed as the world evolves and grows increasingly volatile.

“Risk management and business resilience are going to become ever more important. While 20 years may seem a long way away, planning for that future must start now.”