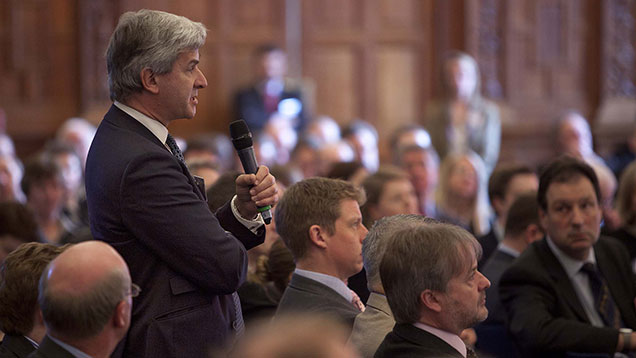 Growers and livestock producers must be more ambitious if they are to thrive in an increasingly competitive global marketplace, industry leaders will be told.

While the best British farmers are world beaters, UK agriculture is no longer the global leader it once was, according to a major report to be published at this year’s Oxford Farming Conference, which takes place on 6-8 January.

In what amounts to a wake-up call for large sections of British agriculture, delegates will be told that slow productivity gains in recent years have left the UK farmers lagging behind their competitors in other countries.

“Some of our farming businesses are very strong – but we mustn’t be complacent. We must be realistic – every business, however good it is, has the opportunity to improve and get better.”
Graham Redman

Written by consultant Andersons, the seventh annual industry report commissioned by Oxford organisers examines what gives the best British farmers the edge – and what separates them from growers and livestock producers not at the top of their game.

It comes just weeks after NFU vice-president Guy Smith warned that in terms of productivity, producers in other parts of Europe, the USA and New Zealand had made much bigger gains than the UK in recent decades.

“As UK farmers, we seem to think we are the most progressive in the world. We have some of the best weather and some of the best soils and high-yielding crops. But we are no longer the pre-eminent agricultural area,” he said.

Report author Graham Redman acknowledged that some farmers would find the report’s message difficult to swallow. “If something is holding the industry back, then it needs to be highlighted – otherwise nothing will change,” he said.

“Some of our farming businesses are very strong – but we mustn’t be complacent,” Mr Redman told Farmers Weekly. “We must be realistic – every business, however good it is, has the opportunity to improve and get better.”

The report comes at the start of another pivotal year for British agriculture. It sees the introduction of the Basic Payment Scheme and new EU rural development programmes in England, Scotland, Wales and Northern Ireland.

Oxford conference chairman Richard Whitlock said: “For the British farming industry to thrive, we must be even more ambitious in our objectives, and aim to be world-class in an ever more competitive and demanding industry.”

Similar concerns were aired last autumn by Peter Kendall, chairman of the Agriculture and Horticulture Development Board. An AHDB review early this year aims to improve the way levy payers’ money is spent so that it enhances farm competitiveness.