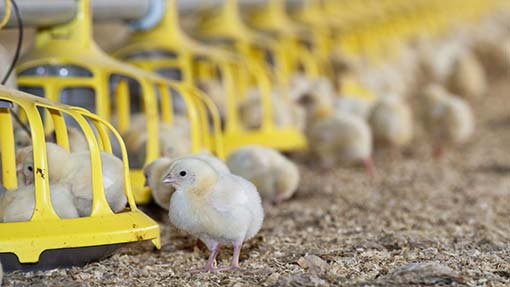 Finding viable alternatives to soya for pig and poultry production is a now top priority for leading feed manufacturer ABN.

Although soya was still the first choice as a protein source, releasing the potential of alternatives such as rapeseed, peas, DDGS and even insect meal was becoming more important, said ABN’s Erin Burns at a forum at the Pig and Poultry Fair 2014 on responsible sourcing.

“At ABN we have dedicated technical teams looking at alternative protein sources, especially those that are home-grown.

“We’re looking at innovative sources, thinking outside the box. What have we already got that we’re not utilising?” said Ms Burns.

“We’re quite heavily reliant on soya beans at the moment to get protein into our diets, and they provide a lot of other things besides straight proteins for diets that other protein sources such as rapeseed and fishmeal cannot provide.”

In a broiler diet, home-grown materials accounted for just 44% of the protein content, and 55% of a layer diet, she said. Soya contributed about 16-20% and 10% of the total protein content in each case respectively.

But there was a great risk in dealing with soya, in the form of price volatility, export problems out of South America, issues of sustainability and greenhouse gases, and overall security of supply.

“We are relying on material coming from far away, in developing countries with governmental problems, and we are competing with China, against which we are a very poor cousin in terms of demand.”

There were a lot of other protein materials out there, she said.

The highest protein levels in home-grown materials were found in fishmeal (60-70%) and DDGS (35%), but each had extremely limited inclusion in monogastric diets for various reasons.

In terms of crude protein per hectare, home grown peas were comparable to soya. “Unfortunately we are not getting enough to compete with soya.

“Insect protein is the real one we’re looking at the moment. It can produce up to 200 times the protein yield of soya per hectare.”

The downside was that flies liked to feed on waste and manure, and under current legislation that was not permitted in the EU, although it was already being used in South Africa.

“There’s a bit of red tape around that in the EU at the moment, but if we can get around that it’s a real winner for the industry.”

Rapeseed was a great source of protein but was quite limiting in terms of its anti-nutritional factors.

“A lot of global research is going on to try and breed out these factors to make it a more viable option to use in place of soya.

Other sources included microbiological, fungal and fermented proteins.
“How to produce them on the scale that we need is the limiting factor, and they’re not competitive with soya.

“For the moment we’ll be focusing on getting the most of out of our home grown proteins, looking at rapemeal, at increasing production of peas and beans and making them sustainable and viable options, and also DDGS as a great source of protein.”

See all the news from the Pig and Poultry Fair 2014