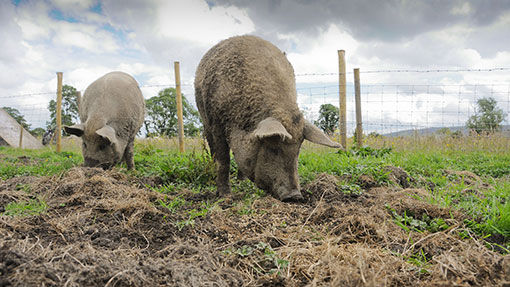 A combination of CAP reform and the land grab for renewables could put the UK outdoor pig sector under huge pressure in the coming years.

Finding land is becoming increasingly difficult and changes under CAP reform could make it more difficult, warned Nigel Penlington, environment and building specialist at BPEX, at the Pig & Poultry Fair.

“Some landlords may be thinking twice, particularly after the wet autumn we have just had,” he said.

He added that there were still many unanswered questions, such as what is the implications of the greening element of CAP on straw supply? “Farmers will be forced to introduce new crops [under the three-crop rule] and this may affect the supply of straw.”

Greening may also affect the amount of land available for outdoor pigs, with more land going into environmental focus areas.

“We are working with the NFU and landlords to consider the implications on agreements and the complexity of NVZ rules.

“We don’t yet know the implications of this, but farmers need to start thinking about it now. It depends on whether outdoor pigs will be classed as a crop.”

Renewables are also competing for land with more maize being grown in the east for anaerobic digestion, he said.