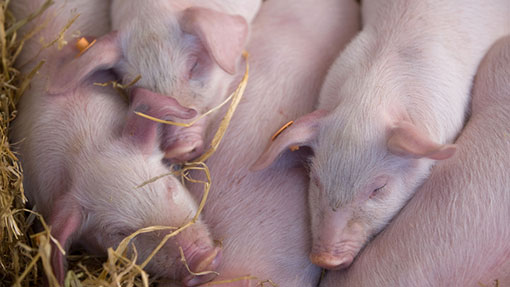 Pig farmers can now see how their pigs are performing in real time rather than relying on historic data thanks to a new growth sensor.

Launched at the Pig and Poultry Fair, the In-pen Voluntary Access Scale will even allow pig producers to record growth rates and feed conversion on a daily – even hourly – basis.

This is enabling producers to take decisions during the growing and finishing period, rather than using historical data, said Hugh Crabtree, managing director of technology company Farmex.

See also: Vote for your favourite piece of farm technology

It is based on a sensor in the pig pen which continuously records the animals’ weights as they wander on and off the scales. Data is sent wirelessly to the computer network and then to an online database.

“I predict that within five years all farmers with significant numbers of finishing pigs will have a growth sensor in at least one sentinel pen a batch.”
Hugh Crabtree, Farmex

But the big difference between this and other systems, he explained, was the integrated link to other monitored and recorded factors such as temperature, ventilation, water and feed consumption.

“This constant stream of information will allow daily fine-tuning for optimum pig performance as well as providing invaluable information to nutritional advisers and vets.

“I predict that within five years all farmers with significant numbers of finishing pigs will have a growth sensor in at least one sentinel pen a batch.”

The companies involved in the £306,000 three-year research project are Farmex, ARM Buildings, and Dicam Technology, who received a grant from the Technology Strategy Board – the UK’s innovation agency.