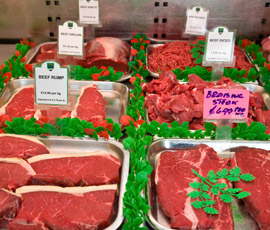 Genomic breeding values could be available in beef cattle in less than a year, according to experts.

Speaking to Farmers Weekly at the Royal Highland Show, Mike Coffey of Scotland’s Rural College (SRUC) said they are expecting to genotype 2,000 Limousin bulls in the next six to twelve months, after which they will then be able to produce genomic breeding values for carcass traits.

The project involving Limousin cattle has been using Video Image Analysis (VIA) data produced from abattoirs, which means an additional seven to eleven carcass quality traits can be selected for.

Commenting on the project, Dr Coffey said: “This has been a landmark project for the UK beef industry in the way beef is evaluated. Instead of a few herds performance recording, it means there will be an increase in the accuracy of breeding values early on.”

The whole supply chain will benefit from the move by the Limousin Society as abattoirs can select animals with desirable carcass traits, resulting in a better end product for the consumer. “Farmers will also have finer control over specific traits,” added Dr Coffey.