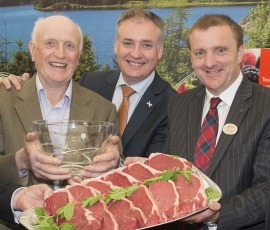 All top four places in the competition went to steaks from Charolais cross cattle, with Mr Green from Little Kilblean, Oldmeldrum taking home the top prize of £1,000 and the championship rosebowl.

“I have taken part in the competition previously but have never reached the short list before, far less win,” said Mr Green. “It is even more satisfying as the heifer which produced the winning steak was home-bred.”

The winner came from the carcase of a two year old Charolais x Limousin which weighed in at 341.2kg and classified R4L.

The steak was one of 12 selected from sirloins from 150 cattle selected at the preliminary judging at McIntosh Donald’s Portlethen meat plant three weeks ago. The 12 steaks were cooked on the Tesco stand by Tesco home economist, Donna Knight, and judged by the judging panel on taste, flavour and tenderness.

Fourth place went to George and Melvin Stuart, Milltown of Birness, Ellon, with another Charolais cross steer tipping the scales at 389kg and also scoring –U3 for conformation and fat cover.