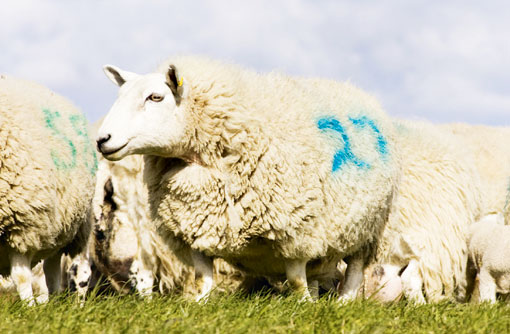 Selecting grass and forage varieties that can provide grazing at both shoulders of the season has helped a Leicestershire producer cut concentrate and fertiliser costs significantly.

Speaking to Farmers Weekly at Sheep 2012 at the Three Counties Show Ground, Malvern, Martin Greenfield said using good-quality forages had enabled him to finish lambs every week of the year.

“Our system is set up so lambs are sold to local butchers and farmers markets all through the year and finished off forage.

“All our pastures are high-sugar leys selected to include intermediate and late-heading perennials, which give growth at the shoulders of the year,” Mr Greenfield explained.

Forages have been selected to maximise forage intakes all year round. The 80ha (200 acres) of high sugar leys, which incorporates chicory, are grazed throughout the year. The farm also has 16ha (40 acres) of short-term finisher leys made up of chicory and intermediate and hybrid ryegrasses. These are designed to be very productive and are used to finish lambs from April to October. Stubble turnips are also drilled into barley aftermaths at the end of July and grazed from November to April.

Mr Greenfield, of Norton Barn Farm, Twycross, works with British Seed Houses’ Helen Mathieu to select varieties that are the best on the Herbage Varieties Recommended Grass and Clover List for early and late season growth.

“All farmers should refer to this, or ask their seed merchant for seasonal growth patterns of varieties.”

She explained how there was huge variation between varieties, but selecting above-average grasses could allow extended grazing and also improve growth rates.

“You can potentially get 10% more yield from selecting the best varieties. A one-unit increase in D value is also worth 20g of liveweight gain in lambs,” she said.

Mr Greenfield has seen big difference in performance since introducing high-sugar grass leys to his flock of 1,000 Texel cross Mules five years ago.

“In the first year I saved £2,000 in lamb concentrate feeding. I was very impressed by how quickly the intermediate and late-heading diploid perennial rygrass leys grew and how early I could get on it with stock,” he said.

“I lamb in April and I want to put ewes and lambs out onto grass as soon as possible and not touch them again. It’s all about doing the basics right and using tools, such as early grass varieties, is key.”

Having been involved in an Eblex chicory trial, Mr Greenfield has noted the benefits of feeding chicory to stock.

“Chicory was particularly good last year when it was very dry, providing feed at the end of the season when there was nothing else.

“Finished lambs were also leaner, which is something my customers want.”