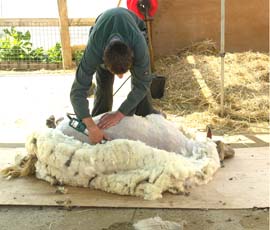 Wet weather has caused a two to three-week delay in sheep shearing, equating to a 200,000kg drop in wool received by the British Wool Marketing Board.

Speaking to Farmers Weekly at Sheep 2012, Mark Powell, chief wool marketing officer for the board, said on average shearing was behind and there would no doubt be a knock-on effect across the country.

“Contractors have had a late start to the season because wet fleeces have meant shearing has had to be delayed,” he said.

“This time last year we had received 5.62m kilogrammes of wool, but we have currently received only 5.4m kilogrammes.”

Mr Powell explained that although wool was coming in at a slower rate, the board was lucky to have some carry-over of stock from last year, so supply was currently not an issue.

“I am not overly concerned as we have caught up in recent weeks. However, if the weather is still like this in one month, I will be worried,” he said.