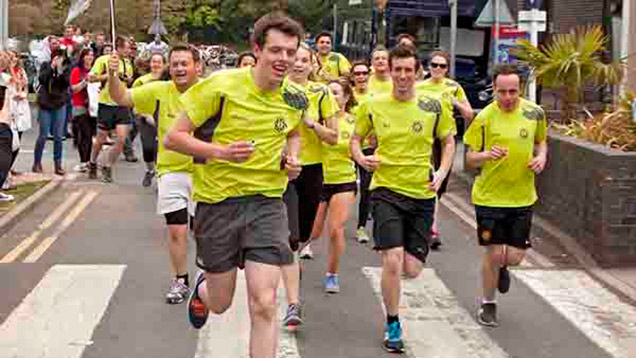 Nineteen members of Worcestershire Young Farmers have run the equivalent of a marathon each on their way to this year’s AGM in Torquay.

The team set off on Wednesday (22 April) at 7am from the Worcestershire YFC county office in Hawford and ran a total of 160 miles to the Riviera centre in Torquay, Devon. They arrived yesterday (24 April) at 3.15pm.

The epic endeavour took roughly three days (29 hours) to complete and involved members running four-mile rolling relays along the A38 – the equivalent of 12 miles each a day.

In the evenings they were kindly hosted by members of Gloucestershire and Devon YFC.

By the time they reached Torquay each runner had covered 26 miles – the equivalent to a marathon.

Members of Worcestershire YFC after arriving in Torquay

So far they have raised £6,500 for the neonatal unit at Worcestershire hospital and Cancer Research UK, but they hope to hit the £10,000 mark.

Runner and chairman of Worcester YFC, Matt Tomkins, said they had chosen the two charities because they were close to the county’s heart.

“One of the girls on the run had premature twin girls a year ago and they spent a long time on the unit.”

Just a few years ago one of Matt’s close friends died from cancer, so he said the challenge had been particularly significant for him.

He added: “Running in yesterday felt really good. A load of YFC members and family from home were waiting for us at the end, cheering us in.

“We had been planning it for months and we all had very sore legs and feet so it was nice to have finally made it.”

To donate to the charities visit virginmoneygiving.com/runninondownthea38 or text 70070 with RODT88 with the amount you wish to donate.