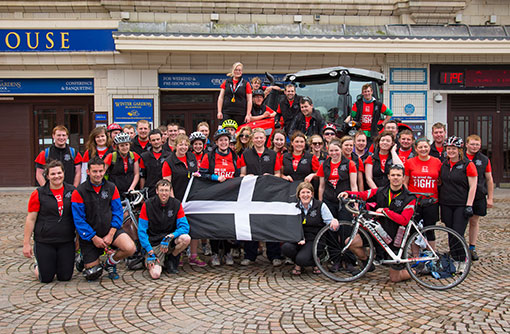 Several Young Farmers counties arrived in style at the Winter Gardens in Blackpool this weekend, raising thousands for charity.

The epic endeavours were in aid of the NFYFC WotNot challenge, a fundraising scheme which sees county chairmen select unusual ways for their members to travel to the AGM, to raise as much money as possible for good causes.

Cornwall’s county chairman Tracey Knowles chose a triathlon for their members to raise money for British Heart Foundation. The team of 46 set off on Saturday 3 May and slept in village halls, chapels and churches in between their walking, canoeing and cycling, accompanied for two days by chairman of council, Claire Worden, who is also from Cornwall. “Everyone has been fantastic and it’s for a great cause as well,” said Tracey.

Several counties took to their bicycles. Canterbury YFC made the 360-mile journey in 36 hours, raising money for Reverse Rett. South East Area chairman Stuart Jakeman, one of the 11 riders, said that it might have taken a little less time if they hadn’t got lost along the way.

Ashbourne YFC pedalled the 100 miles from Derbyshire to Blackpool and added some fancy dress to up the challenge. The men wore fireman outfits for the on- and off-road journey, very apt given that the funds raised were for Derbyshire Fire and Rescue.

Wareham and Purbeck YFC set off on Tuesday 6 May to cycle from one pier to another, Swanage to Blackpool, in support of local Dorset charity, Amelia-Grace Rainbow Fund.

All the way from Bucks, members of Edgcott and Winslow YFC cycled 200 miles in aid of two charities close to the club, The Motor Neurone Disease Association and RABI. The team bought bikes back in November with the intention of training, but admitted that they struggled to fit it in around lambing. Nevertheless, apart from a couple of injuries, they completed the challenge in 22 hours and 42 minutes.

With a cycling twist, members of Croft YFC, Lancashire, spent a month building a nine-person tandem for their 45-mile journey to Blackpool, raising money for Cancer Research UK.

“It was nice on the downhills, but the hills were a killer,” said team member Craig Watkinson.