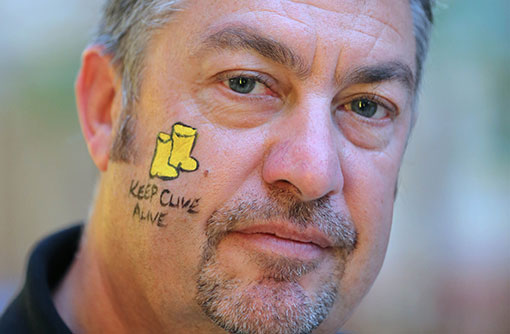 More people were killed in agriculture in 2013 than died on active service in Afghanistan, according to insurer NFU Mutual.

That’s the shocking statistic that members learnt from the insurance firm’s Adrian Oldman (pictured), who was on hand at the YFC AGM in Blackpool to spread the safety message.

“There were 34 fatal accidents on farms in the UK last year, which is a horrendous statistic,” said Adrian.

Falls from height (often roofs) continue to feature prominently in the figures, as do incidents involving animals and slurry tanks, and those related to ptos and vehicles.

“We want people to understand the dangers in farming and how to avoid them.”
Adrian Oldman, NFU Mutual

The NFU Mutual took the opportunity of the AGM to launch its new electronic interactive game, Keep Clive Alive, designed to highlight some of the many risks.

“We want to make sure that what could be seen as a tedious health and safety message gets through to a young audience and that they’re aware of the risks. We’re saying to them: Stop and think. Who would look after your family if you weren’t around? Who would fill your boots?”

Keep Clive Alive is about to be released as a smartphone app, and will be taken to shows around the country this summer by NFU Mutual.

“We want people to understand the dangers in farming and how to avoid them,” said Adrian.