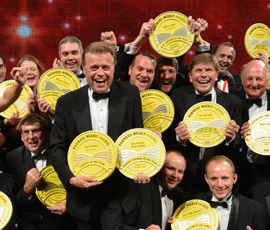 Lord Coe received a standing ovation from the 1300-strong audience at the 2012 Farmers Weekly Awards.

See him address the farming audience in this Awards Night highlights video, which captures the excitement, emotions and energy of the biggest night in farming.

Lord Coe presented the Awards and drew parallels between the `sacrifice, courage and talent’ of sporting Olympians and farmers today.

And he recalled that the only people he would see when `pounding the roads and tracks during his running training were farmers: “Their hard work, dedication and devotion is truly inspiring.”

TV chef and farmer’s son, James Martin, appealed to farmers in the room to help him supply local food into NHS hospitals and was bombarded after the ceremony with willing participants.

See the Farmers Weekly Awards site and nominate for 2013