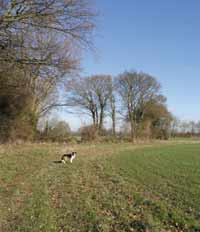 A good-sized farm in Kent, another unit in Bedfordshire and two blocks of land in Hertfordshire have just been launched, adding up to almost 1000 mainly arable acres that should provide a good test of the early spring market.

Little Cheveney Farm at Marden is, at 349 acres, one of the largest farms to come to the Kent market in recent years, according to Alan Mummery, partner at agent Lambert & Foster.

The farm, guided at £3.3m for the whole, is lotted three ways. The 17th century, five-bedroom, Grade II listed farmhouse, together with traditional timber-framed outbuildings and about 21 acres of pasture and parkland, is guided at £1.4m.

The remaining land has been split. About 172 acres of productive grade 3 land and five acres of woodland parcelled up with modern farm buildings, including 300t of grain storage, as well as a traditional brick building with consent for a dwelling. The guide is £1.5m.

A further 151-acre block is offered separately at £750,000. Mr Mummery said all the land had been in a continuous arable cultivation, producing good yields of mainly winter wheat and beans.

Little Cheveney was purchased by the Tickler family in 1975 and is offered for sale following the recent death of Harry Tickler, a well-known Dorset Down sheep breeder.

“It’s a real gem and we are confident that the location and size of the farm will have broad market appeal,” Mr Mummery said. “We are expecting strong interest in the farm as a whole.

Ducksworth Farm at Stagsden in Bedfordshire runs to 230 acres of grade 3 arable land, together with a four-bedroom house and a range of traditional buildings with planning permission to convert to three dwellings. There is also a modern set of farm buildings.

Matthew Allen of Fisher German’s Banbury office reckoned the very limited supply of property this year should attract a range of prospective purchasers.

“We have lotted the property six ways to give the greatest flexibility and appeal. However, we will also offer the property for sale as a whole as I am sure there will be interest from farmers who can accommodate the development angle.”

The three main blocks of land at 138 acres (plus buildings), 60 acres and 19 acres average about £5500/acre. “Very little land had been transacted recently, but this feels about right for the market,” said Mr Allen.

Fisher German is also offering an investment opportunity of just over 200 ring-fenced acres at Berkhamsted in Hertfordshire, mainly grade 3 arable land with 30 acres of woodland.

Partner Andrew Ranson said: “There are attractive capital tax advantages with investments of this type and traditionally in times of uncertainty gold and the let agricultural land market have been seen as a safe haven.”

Next to this land is a further block of 227 acres of arable and pastureland and 28 acres of woodland, jointly offered by Fisher German and Knight Frank as a whole for £1m or in five lots.