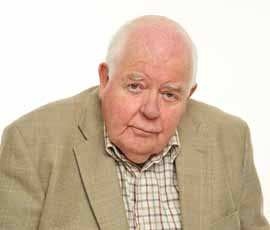 At the risk of boring those readers who achieved record yields and profits last year, I thought I’d take you through figures that have just arrived from our accountant.

My excuse is to express solidarity with those who suffered, as we did, from a meteorological phenomenon the like of which I had never experienced before. I don’t know the extent of the worst of the drought, but I know broad swathes of the country’s farmers had similar problems. They know who they are and, although it will provide scant comfort, it might help to know they’re not alone.

The most dramatic figure in our accounts is the deficit against expectations of wheat – our main crop. Ours were 35% down on budget and you can’t make up a loss that big from elsewhere on the farm even if you sell at a bit better price than planned – and not all was.

The harvest peas were also down on budget – by about 20% – but on a smaller acreage so that’s less serious than the wheat.

But the crop that’s done best for us this year is sugar beet. We approached drilling time last March with trepidation. We’d just experienced the worst beet harvest ever, with losses because of frost running to millions of pounds across the beet-growing region.

Like many others, we were in two minds whether to grow them again. But we’d signed a contract so decided we should honour it.

The deeply frosted soil following that awful winter meant we were able to plant seeds into silky seed-beds and there was just enough moisture (at that time) to germinate the seeds. Sugar beet plants use very little moisture in the early growth stages so they didn’t suffer as the drought set in and lasted through the spring. Fourteen weeks it went on without measurable rainfall. And while the grain crops withered, the beet put down deep roots and survived until the drought broke at the end of June.

We had more rain in July and through harvest, which kept the beet going before another extended dry spell through the autumn. I wouldn’t have believed the roots could make up to such good yields with so little rain, but I suspect it was a lot to do with ideal drilling conditions and that the roots had gone down in search of moisture from the start. In any event, the crop has turned out well with a harvest as easy as last year’s was terrible. And although as I write we have roots stored in clamps on the farm still to deliver to the factory, the beet income is clearly going to be above average. What a difference a year makes.

Thanks to the beet, therefore, the bottom line on our accounts does not look as bad as it might have done. But it’s still disappointing against expectations a year ago. And the reasons for that include sharply higher costs. Items such as fuel, insurance, hay bought for our livery horses and other things all cost far more than the previous year and the budget we’d allowed. That said, the decision not to apply as much top dressing or fungicide as previously planned to cereals incapable of responding to them helped the bottom line a bit.

But it could have been so much worse. We could have had floods and been unable to cut hay or harvest all the grain as many did in southern Scotland and the North West. They had a worse time than we did.

Which crops have done well for you this year and which ones have disappointed? Have your say on our website forums.