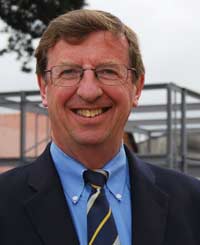 He might be about to retire, but Harper Adams principal Wynne Jones is in buoyant mood about the future of farming. In this far-reaching interview ‘Wynne the Prin’ looks back on his career and provides some advice for young people

It’s a good time to go into a farming career, says Wynne Jones.

The principal of Harper Adams in Shropshire, speaking ahead of his retirement after a career in the land-based education sector, reckons food and food security issues are moving up the political agenda. There’s also a growing interest in the impact of food on health, well-being and lifestyle.

Fashion that, he says, around issues to do with climate change and how the nation is moving away from an economy based on oil towards one based on the bio-economy and farming and issues related to land use and natural resources will move more centre stage.

“The employment prospects are good and I think they will be increasingly so,” says Wynne. “The public is very supportive of farmers. The tide has turned.

“I’m confident that the industry is going to go into a far better 10 years ahead of it, than the 10 years behind it. There is a rejuvenation of interest in our subject area.”

What’s crucial, says Wynne, is that sufficient numbers of bright students are attracted into the sector.

“What we need to do – not just in universities, but in industry – is ensure we don’t disillusion them. We need to emphasise the opportunities.

“Herd managers, for example, can be in charge of buildings, machines and land with a capital worth of many millions. You wouldn’t get that in other industries. We need to highlight the responsibility, the autonomy – and the rewards these people are getting.

“We should, for example, have a far more elegant and grand name for tractor drivers, which reflects their competence. If it was an aeroplane, we’d call them a pilot not an aeroplane driver.”

One of the key skills that youngsters will need as farming changes is to be able to demonstrate an ability to juggle issues because the businesses they’ll be going into will tend to be complex.

“A good technical and business grounding is essential, but over and above that people need a hunger and energy and a can-do mentality,” says Wynne. “Those who’ll get on are those who are not confined by a 9-to-5 mentality – who take the view that the job is finished when the job is finished.”

Good information technology abilities will also be a perquisite for success in tomorrow’s land-based sector.

“There is so much information out there that it’s futile for us to try to teach students too many facts because they change, but what you want is an ability within a student to be able, when confronted with a new situation, to be able to ask the right questions in the right order, to know where to get the information and the evidence and then to be able to analyse that information to solve new problems or develop a new business case.

“It’s that general skill that’s important these days because information changes so often. We’re going into a knowledge driven, as well as a market driven, industry.

“At the practical end of farming, we’re trying to shift from an industry that’s been subsidy driven to one that’s more and more market driven. We have to learn skills like: How do we handle the volatility of markets?”

Some of the key attributes that the successful farmers of tomorrow should concentrate on developing might come, not from the academic curriculum, but from college clubs and societies, he reckons. In many ways this, he says, is where the expression “the spirit” of Harper Adams” comes from.

“A lot of life skills are embodied on the campus, as promulgated by the Young Farmers movement, which I have a great respect for – a lot of their objects and ours overlap.”

And it’s not always the obvious leaders who emerge in such environments, he says. “In sports, for instance, it’s not the captain who understands if things are going wrong or what needs to be done. 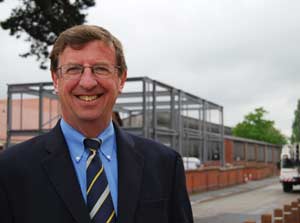 “A lot of our students are aspirant rural entrepreneurs. We wouldn’t want to badge them simple, say, agriculture, or land managers; a lot come from a business environment and a lot of them would want at some stage to try and develop their own businesses as well.

“Quite a number of our graduates, when they go home, rather than expand the production side, tend to move one step down the chain and add value (towards consumer).”

This has been reflected, says Wynne, in the growing interest and investment in issues to do with food, food technology and food marketing and business. Harper has broadened its curriculum, but agriculture still features very heavily.

Working with young people has been immensely rewarding, says Wynne. “That’s the benefit of young minds, there is no history and no baggage, it’s just opportunity and future and we’re encouraging students to think that the future hasn’t been pre-ordained, it’s up to them to use their intelligence and energy to fashion it and shape it.

“We’ve certainly been emphasising that in terms of issues like climate change. They’re going to be on this planet a lot longer than I am so they really need to grab hold of some of the issues and put pressure on organisations and leaders.

“A lot of us need to realise that our children will be working for our pensions and picking our nursing homes – we need to give them a good education.”

He’s loved working in the education sector, but had always been adamant he’d retire at 60. “I’ve spoken on so many farmers’ platforms and said there a lot of old farmers around. I have to fall on my sword and make way for younger people.”

Wynne plans to relocate to Aberystwyth. He was based in the Welsh town before moving to Harper, so kept a house there and likes the idea of being based in a University town. “Young people keep your feet on the ground.”

Before then, however, is this year’s graduation ceremony. “I wanted to be around for graduation as principal. I’ll overlap with David Llewellyn, my successor, for a month. Then there’ll be an element of continuity and an element of change.”

As for his plans after then? “I’ve got the offer of relief milking from my two son-in-laws, both of whom are involved in dairying,” he laughs.

Which A levels would you choose if you were a young person wanting to work in the ag sector?

Science is important. A foreign language can also be good – our engineers, for example, may want to work with John Deere or Claas, so need to speak German and those in the fresh produce sector need to be dealing with Spain or Italy. Everybody should be encouraged to improve their understanding of mathematics. In my view it’s better to have studied Maths AS and failed than not have studied it at all

Why is a sandwich year important?

“Students gain an enormous amount from it – there’s a tremendous difference in their aspirations and abilities to make judgements in the final year. It also gives us a very rich source of contacts with companies and business and by debriefing every year then the relevance of the curriculum to industry and commerce is regularly reviewed.

Do students ever surprise – ie, ones who you don’t think will get on achieving great things?

Let’s just say There have been times when I’ve been in this room opposite a student thinking: When that person puts that creative energy into a positive direction, they will be successful.

When are you favourite times of the college year?

I’ve always get an incredible excitement when the new students arrive. I’m one of the very few staff who would change places and go back to being an 18-year-old. The summer ball is also a fantastic occasion, run by the students and I enjoy seeing the students at graduation They’ve worked hard and the awards are well deserved – it’s an opportunity of sharing that day with them and their families.