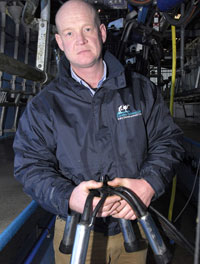 Bovine TB has had a devastating impact on milk production and profitability at Gelli Aur College in Carmarthenshire.

More than 250 cattle have been culled over the past 18 months, including 100 following a single test and farm manager John Owen admits the outbreak has also sapped staff morale.

He says it does not help when nothing is being done about possible wildlife reservoirs of infection, including a large number of badger setts and wild deer. But he is reluctant to take up the suggestion that the gamma interferon test should be used to pinpoint all infected cattle on the farm.

“We do not want to lose a large number of animals in one go as we want to maintain cash flow, have cows for teaching students and hang on to our quality staff.”

The latest figures show that TB has hit the low input spring calving herd most severely. In December it numbered only 86 cows, 42% fewer than in the same month in 2007 and well below the planned total of 180.

Six months later the £133,690 rolling herd margin over purchased feeds was 19% lower than in December 2007, though a higher average milk price had increased rolling margin/litre from 18.41p to 20.86p. 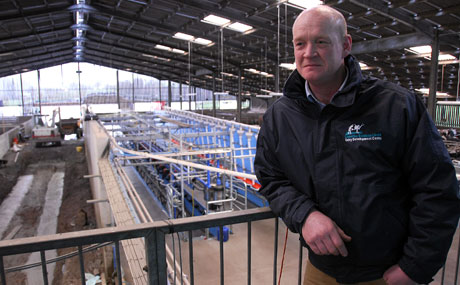 Over the past 12 months John Owen still had the confidence to invest in two new 20:40 herringbone parlours at Gelli Aur

“Compensation certainly does not cover consequential losses and will not help us find equivalent of the Scandinavian Red cross cows we lost.”

An extra £500 a head was paid for high genetic merit cows lost from the college’s autumn calving herd, which is managed to provide a high margin a cow. Because of replacement purchases and heifer calvings it numbered 225 head in December 2008, the same as a year before.

By last December the rolling margins over purchased feed a cow had risen year-on-year by 41% to £1563, and the rolling MOPF/litre rose by one-fifth to 21.67p.

“Next year we hope to reduce feed costs by using more grass and legumes.” Forage maize has already been abandoned and whole-crop cereals will go the same way. This will cut the annual cost of cultivations, reduce fertiliser bills and stop soil structure damage on the farm’s flood-susceptible land.

“If we can take three good cuts of red clover/grass silage we should be able to replace the cultivated forage crops and reduce input costs,” Mr Owen claims.

Despite the problems of the last year he remains upbeat about prospects for dairying, particularly in a first class grass growing area like the Towy Valley.

This provided confidence to invest £200,000 in new milking facilities. It was not possible to install the 40:80 single herringbone needed within the existing shed layout, so Mr Owen decided to split it into two located in parallel. The first, commissioned on time on 18 January, is already working well and the second half will operate from late February.