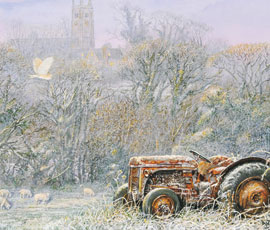 Raffle tickets for the original painting, which will feature on the RABI stand at the Royal Cornwall Show (6-8 June), are being sold during the summer.

“I wanted to do something special to mark my 40 years as a Cornish artist, so it had to be something very typical of my art, love for my chosen way of life and where I live,” says Dick.

“It also needed to be suitable as a fundraising painting and limited edition print for RABI and also to be used for their exclusive 2013 Christmas card. So I had to combine all these elements in one painting as naturally and truthfully as possible.

“The painting, Home to Roost, features a view of my home town, St Columb Major, from ‘Sweep’s Field’ where some friends of ours stable their horse, Sweep. This field was also used for sheep in the past so I have portrayed them as part of the farming element.

“The vintage Ferguson tractor is included both for agricultural reasons and my love of old vehicles. The seasonal atmosphere is created by the result of light overnight snowfall and, of course, the necessary wildlife is represented by one of my favourite birds, the beautiful barn owl.”

The painting will be published as a signed limited edition of 40 prints, with £30 of each one’s £40 price tag going to RABI.

Meanwhile, another rural charity, the Addington Fund, will benefit from a piece of pioneering art by Carol Payne who can be found in the flower marquee at the Royal Cornwall.

She wants to create an original painting and has laid down a challenge for visitors. She will take along a photograph of a poppy field and a 2ft by 3ft canvas, pre-painted with sky, landscape and a sun in gold leaf. “Then I will invite people to paint a poppy. I will take along red and orange paint and ask them to add their brush strokes for a charitable donation. People love splashing about with paint and I don’t think this has been done before,” she said.

After the show, Carol will add finishing touches to the painting and she hopes to sell or raffle the finished product.

All the money raised will be shared between the show’s two 2013 nominated charities, the Addington Fund and the British Red Cross.

“I am putting my head on the block because we don’t know how it will turn out, but it is certainly going to be something different,” said Carol.