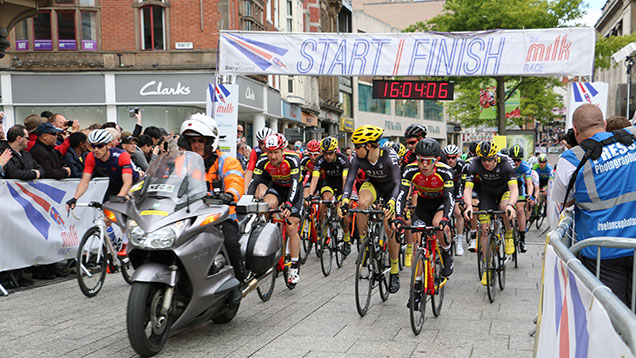 Tens of thousands of people took to the streets of Nottingham on Sunday (24 May) to watch some of the world’s elite cyclists take part in a race which aims to promote the dairy industry.

The dairy industry’s link to the race started in 1958 when it was first sponsored by the Milk Marketing Board (MMB).

The relationship lasted until the MMB was disbanded in 1993, but it was brought back to Nottingham in 2013 by the Dairy Council and the Milk Marketing Forum. This year the event received additional support from DairyCo.

Sandy Wilkie, Dairy Council chairman, said the race was a fantastic opportunity to promote milk and dairy to consumers and talk about the nutritional benefits dairy products offered.

“When you see the enthusiasm for the race, the connection with world-class athletes, celebrities and the good news around dairy, it’s got to help [promote dairy],” he said.

“We want to see this good story continue,” he added. “I would be disappointed if there wasn’t another milk race here in Nottingham, and I would like to see this event in cities around the country.

“It is a great message to put into the heart of the general public about the dairy industry.”