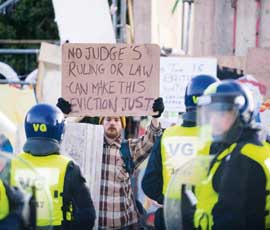 The cost of providing police support during last year’s mass eviction at Dale Farm was more than £2.3m.

Essex Police confirmed the figure for policing the shutdown of Britain’s largest travellers’ site, near Basildon, in October.

All police planning, operations and activities for the work totalled £2,375,237, a force spokesman said.

A report will be presented to Essex Police Authority’s finance committee next week and a full breakdown of costs is expected later this month.

Basildon Council has not yet revealed how much it spent on the operation, which includes paying a team of bailiffs.

A council spokesman told the BBC that a final figure has yet to be confirmed, but the authority was “confident” that the cost would be under the £8m budget.

The police operation to clear protesters from the six-acre site resulted in violent clashes before council-employed bailiffs completed the clearance. It followed a decade-long planning row over unauthorised plots.

Around 80 families were evicted, but within weeks at least 10 families had moved back on to roads inside the site.

Although the illegal site is now clear, around 50 caravans are believed to be located on the neighbouring site, exceeding its authorised capacity.