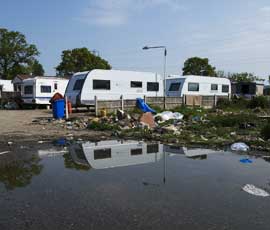 Travellers who were evicted from the Dale Farm site in Essex last autumn could face further enforcement action to remove them from the illegal pitches that were set up in nearby lanes.

Basildon council officials and Essex police ousted the travellers from Dale Farm in November 2011, after a long-running legal battle over illegal development of pitches.

But some of the travellers only moved as far as a track close to the site. Basildon Council said it had served about 50 planning contravention notices in March giving the families involved 21 days to move away from the area.

The deadline passed on Wednesday 11 April and a Basildon Council spokesman said officials were now deciding what action to take.

“There are still a large number of caravans on the side of the road,” the spokesman told the BBC.

“We are actively considering all options very carefully with our legal team. We just need to consider whether we go down the judicial or planning route.

“Enforcement of planning law is absolutely an option.”

Basildon Council spent almost £5m on the clearance of Dale Farm and a further £1.6m was used to contest a series of injunctions brought by the travellers.