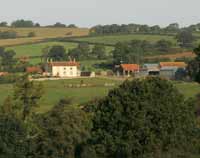 Two dairy farms with wide but differing appeal have been launched on to a West Country market hungry for good properties.

Brewhamfield Farm will be one of the high points of the 2010 farm-selling season, according to David Cross of Savills.

The 208-acre ring-fenced farm, near Bruton in Somerset, has a gently sloping southerly aspect and is home to 150 prizewinning pedigree Jersey cows.

A four-bedroom, twin-gabled Grade II listed farmhouse stands in the centre of the organic farm. Additional accommodation includes a two-bedroom annexe and a modern farmworker’s dwelling, and there is an extensive range of modern farm buildings.

“Brewhamfield is a real delight and is one of the prettiest farms that I will have had the pleasure of selling in a number of years,” said Mr Cross. “It is easily accessible and will have wide appeal.”

• Scadghill Farm, near Bude, is a 220-acre holding with a range of modern farm buildings including a 12:12 herringbone parlour.

It has plenty of potential to tap into the region’s tourism industry – the Grade II listed farmhouse includes a successful bed and breakfast enterprise, there is a Caravan Club campsite and a traditional barn has planning permission for holiday accommodation.