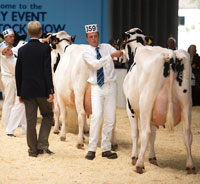 The success of last year’s Dairy Event and Livestock Show has been reflected in an unprecedented early uptake of stand spaces for the 2011 event.

More than 300 stands have already been booked for the industry’s premier livestock event, which will take place on Tuesday 6 and Wednesday 7 September at The NEC, Birmingham.

The exceptional take-up made within four weeks of the stand space schedule being issued is up 48% on last year and includes 20 new exhibitors. Milking and feeds and forage are the two most popular zones, according to the event’s organiser, The Royal Association of British Dairy Farmers.

“The trend reflects feedback from last year’s hugely successful event where 86% of the exhibitors surveyed said they would rebook in 2011. We urge all exhibitors who have yet to book space to submit their application forms at the earliest in order to secure a site.”

He adds: “Relocating the event to The NEC in 2010 won the approval of 92% of our exhibitors who rated the show venue as excellent or good. Similarly 91% of visitors indicated they would return in 2011. We have every intention this year to build on these results and provide ruminant livestock farmers with a one stop shop for all their input requirements.”