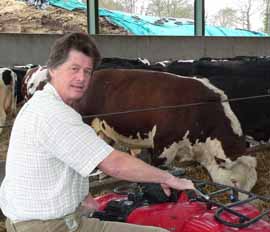 A court case involving 21 dairy farmers – among them NFU vice-president Gwyn Jones – has been adjourned until a later date.

The dairy producers are charged with using an unlicensed labour provider to employ migrant farm workers.

Their case was due to be heard at Swindon Magistrates’ Court on Tuesday (15 March). But the hearing has now been adjourned until a later date.

The 21 farmers are charged with using the services of Marden Management, a Wiltshire-based employment agency. It follows a lengthy investigation by the Gangmasters Licensing Authority (GLA) into the possible illegal employment of farm workers.

The GLA investigation found that Marden Management was not licensed as a labour provider. It is a criminal offence to employ farm workers supplied by an unlicensed labour provider.

GLA officials passed their findings to the crown prosecutor within DEFRA, who decided to take legal action.

Marden Management director Chris Blakeney said his company had made an honest mistake. He believed Marden did not need a licence because it supplied qualified and experienced dairy workers, rather than unskilled labourers.