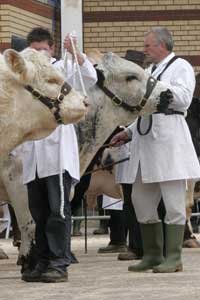 The memoirs of a farmer who attended the first ever Royal Show in 1839 has been unearthed, providing a unique insight into the event.

The final ever Royal Show takes place next week (7-10 July) and it is expected to be one of the busiest for years.

However, things will have changed considerably from the first show which was held in Oxford.

According to the manuscript, exhibitors travelled for up to six weeks by sea, canal and land so they could enter their livestock in classes.

The document which is based on the memories of farmer Charles Hobbs gives a vivid account of the first show which he attended with his uncle when he was in his late teens.

At the time Charles was a tenant farmer of dairy, beef and crops near Cirencester.

The show was something that everyone for miles had been talking about, he said.

“The influx of visitors from all parts of the country was so great that lodgings and even food was scarce.

“Luckily Uncle James had ordered beds in good time at the Roebuck Inn and Giles and Matthew Edmonds had friends close by. But some of those from farther a field had to spend the nights in their post chaises and got home near starved to death.”

The document highlights Charles Hobbs’ pleasure at meeting someone called Mr Bates – a celebrated breeder of Shorthorn cattle whose animals were one of the main attractions.

Such was the crush around Mr Bates’ cattle at one point, Charles was forced to go off and look at the machinery on display.

What memories of the Royal Show do you have? Share them on the forums.